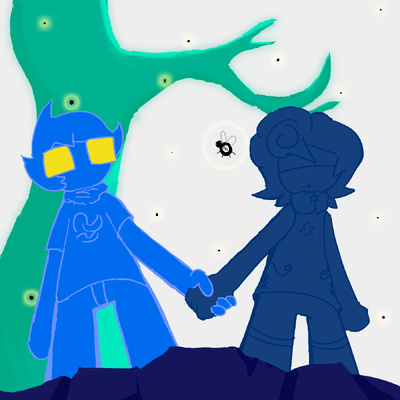 This song in its early stages was meant to be about the medium and space. But as soon as it was put in a recording with appropriate instruments, it reminded me a lot more of LOWAS than anything else, so it just sort of became that. All it took was a borderline distasteful amount of reverb to add a feeling of elevation, and it became Altitude. I always think of John's quest bed whenever I hear this song, probably just because it's the only really high-up point on the whole planet.

Also, I think the artist for this track wanted to make it have to do with John/Roxy? Which isn't really what I initially had in mind, but it's cool and it works. Death of the Author and all that.

i went through like fucking 5 variations of this art before i just decided to fuck it and do vaguely johnroxy retcon sequence that was at the bottom of the subreddit for some time. all of the others involved davesprite but fuck blorange. also please dont notice how lazy i was and i used the color blending tool on the tree when everything else was with the pencil tool.