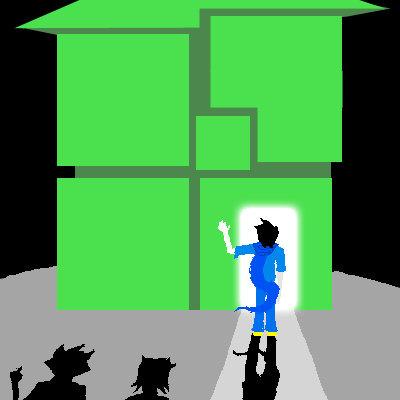 My approach to music is very dramatic. When I create music I tend to visualise very specific scenes which take place when it plays. Farewell was originally intended to accompany the scene where John discovered Mom and Dad were dead. At this point in the story it could have gone any way, so I started playing around and doing improvisations based around the Showtime theme, being a theme central to John. After messing around some more for a while I realised that a more bittersweet touch worked better though, and that instead of being used for lamenting, in my minds eye the piece seemed to fit something more akin to a goodbye, such as a scene displaying the kids and trolls parting ways.

This piece is based on what I hope will happen (still). After joining forces to defeat Jack, the kids' ultimate reward is unlocked and the trolls either go back to their won world, or accompany the kids. John is the last to leave and you can see the shadows of Terezi and Karkat. John gives a final wave before stepping through the door, Karkat gives a last farewell gesture in response. A bittersweet ending indeed.