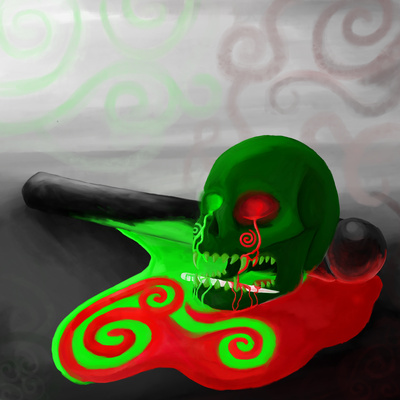 It's a battle for dominance between Caliborn and Calliope.

All I really have to say is that I have never worked as diligently on any art piece, as I have on this. I spent, what, two months psychoanalyzing a painting of a skull, covered in blood. I had several friends critique it through the process, and eventually ended up with this.

I knew it has a hance to be used as cover art in the next LOFAM, which made me sort of sheepish toward the end because I realized that the fan albums are a big deal, which lead me to submitting it a bit later than I had hoped, because I became nervous.

As for the actual song, after listening to it 164 times on my counter, I have realized that I still love the song as much as I did the first time I listened to it.