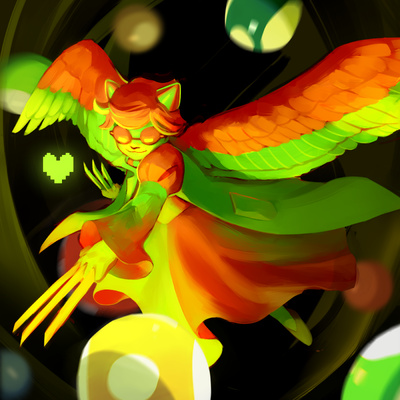 After writing Denizen, my only thought was that I really wanted to keep writing dubstep, but good dubstep. That was when I deicided to reach out to my good friend poly, who I'm a big fan of. Her dubstep is as great as her production skill, so at the time it was the perfect arrangement. It was hard working together long-distance, but we somehow made it work through all-nighter Skype calls and a lot of caffeine. The way our styles differ and yet somehow met in the middle helped make Merge exactly what I hoped it'd be.

Producing Merge was one of the most exciting projects I'd worked on in a long time. Kouta and I made a great team, and working with her pushed both of our boundaries well beyond our comfort zones. We got a lot of doubt from our friends about working with the caw and meow samples, but we were sure it was the perfect way to bring the song together. We were also heavy-handed with leitmotif from the original soundtrack, focusing on blending them in a way that was both interesting to listen to and recognizable. This was made with the utmost care, so give it a listen or ten.

I drew this immediately following [S] Collide. Kouta later asked to use it as the track cover for Merge on SoundCloud, and I was happy to oblige. I'm honoured that they saw it as a fitting image to accompany their (very impressive) track.