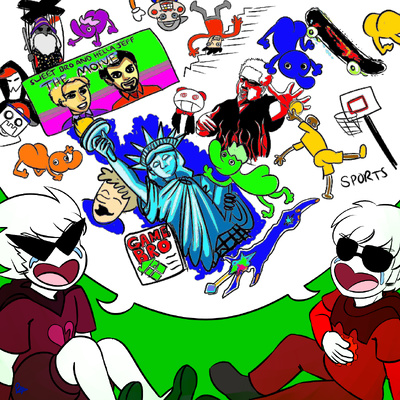 A track to celebrate the Striders finally talking and hashing out their differences! Because it's a Stirders song, I couldn't help adding a little breakdown. Sharp-eared listeners may also note that in the call-and-response main melody, the first synth is in 4/4 time and the second synth is in triplets—just as Dave and Dirk aren't quite in perfect lockstep. I left the ending open ended and hopeful, because I feel like the final chapter on their relationship has yet to be written.

Dave and Dirk's reuinion on the spires of LOTAK was serious and poignant, but not without its sillier moments. This art is a mashup and showcase of the most ironic bullshit the Striders had to offer throughout the story. Smuppets galore, their plush rumps and jutting probosices laid alongside such gems as a Game Bro magazine, an artifacted Statue of Liberty, the lovable Squarewave and Sawtooth, and SBaHJ icons including the Big Man himself. And who could forget Guy Fieri's surprise appearance, his scream frozen in place as he prepares to assume the title of the next Antichrist? But that's a story for another time.