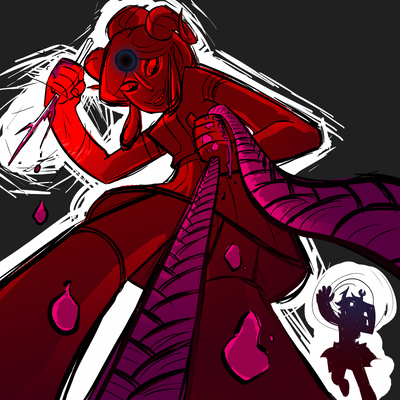 For my piece, I wanted to write for an obscure part of the story that we only really hear about through exposition in Openbound: the duel between Damara and Meenah. Damara ends up killing Meenah (the section around 2:08), who is saved by Aranea (the final round), carrying her to her Quest Cocoon so she can Get the Tiger (the ending section). Damara and Aranea don't really have canonised themes, so I composed my own motif for Damara, and referenced Fuchsia Ruler for Meenah, and Killed by BR8K Spider!!!!!!!! for Aranea (technically a Vriska theme, but they're both spider girls, gimme a 8r8k ;;;;) ). I actually started writing this track without a theme in mind, only really knowing it was going to be a battle theme, so the working title was "beforan beatdown". The whole track uses original synth sounds made with Magical8BitPlug and NES VST, except the drums, which are sampled from Secret of Mana, and the piano.

I always found Damara's sudden madness very interesting. By all accounts, she used to be a sweet girl until finally snapping and fighting Meenah. Aranea's involvement, however, has always been interesting to me. She, of course, brought Meenah to a quest bed, but I always wanted to explore the ambiguity of her involvement. Whether it was just to drag Meenah away or a decision to nudge along a friend suffering in silence to take action, who can really say. A bloody battle, a bully beaten, and a girl freed from her silence. I wanted this piece to show Aranea's ambiguous involvement and the terror that Damara had become.