How to Diagnose a Vriska 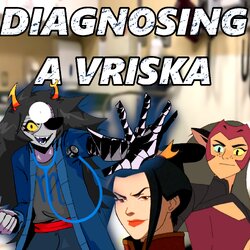 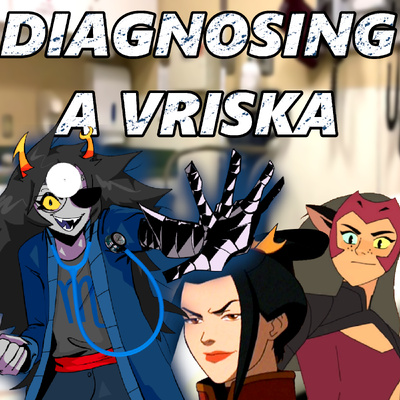 Jonaya: And welcome to “How to Diagnose a Vriska,” a thinkpiece on how we, the hosts of Will it Homestuck, see Vriska as a character and diagnose her archetype in other pieces of media. I use she/her pronouns,

Bucky: And I use he/hir or they/them pronouns. Let’s get started!

Bucky: For me, it’s important to look at where we can find more Vriskas in fiction because I like terrible women! Vriska is important because she’s a dirty, nasty girl who is really trying hard to be a good person, or at the very least do what she believes is the right thing. There’s a lot of room for a lot more characters who do something like what she does in the narrative of Homestuck in other pieces of media. I want to push for more messy women!

Jonaya: Vriskas are a character archetype in their own right - ones that sometimes intersect with other character archetypes but ultimately stand out on their own. We can definitely look at the surface-level stuff - the asymmetrical eyes and arms and the general aesthetic - but we think there’s more to it than that. I usually like to start by looking at the character’s relationship to the narrative and how that intersects with her own experiences. A Vriska might not always be the hero of the story - probably isn’t usually the hero of the story - but she sure would like to be! A character with a strong desire to be in the spotlight often has a good chance of being a contender for the role of the Vriska. But that’s just one small part of the analysis - we here at the Vriska Analysis department of Will it Homestuck have developed a series of criteria to use to identify Vriskas in media.

Bucky: With that in mind, let’s get into the meat of it.

Jonaya: What are some important Vriska characteristics to you when looking to understand and diagnose a Vriska?

Bucky: An extremely important part of Vriska is her relationships. She is influenced heavily by her ancestor, Marquise Spinneret Mindfang, and by Doc Scratch, the grand host bastard himself. She also has Tavros, who she feels tied to through her ancestor’s matespritship; Eridan, who she engages in a relationship with out of duty towards her lusus and a little through her ancestor’s kismesitude as well, her ex-moirail Kanaya, and Terezi, who she’s partnered with and has a revenge cycle to be fulfilled with.

Jonaya: Doc Scratch had his felty, gross little puppet hands all over the Scourge/Charge rivalry. Encouraging Aradia to haunt Vriska and Vriska to get her revenge in turn. Terezi manipulates Scratch who then uses Vriska as a weapon of his own revenge. Here we see one of our recurring Vriska points: that they are often influenced and groomed by a creepy older adult, usually a man, with his own goals for her growth.

Bucky: Vriska tries very hard to emulate Mindfang throughout her arc, pretty much right up until and a bit after she meets Aranea in the dream bubbles. She finds the journal early, after it lands from a meteor, and uses it to locate her Fluorite Octet. This journal is what Vriska uses to guide her life for the next several sweeps. She strives to be as cool and strong and badass as Mindfang wrote herself to be, and models her FLARP character after this long-dead troll. Mindfang is pretty empowering to Vriska at the time, giving her a character to roleplay her confidence through.

Jonaya: As KC Brush Bandit once said, a Vriska will often comphet on some boy. Honestly, I’m inclined to agree. Whatever the specific reason, the idea that you, as a girl, are required to have a relationship with a dude is often a smaller, but definitely important, aspect of the Vriska experience. In the end, the whole process is something that causes nothing but harm to the Vriska in question.

Bucky: Speaking of vicious women, I want to talk about Terezi now. Another extremely important Vriskaracteristic is that she has a complicated, turbulent, and emotional relationship with Terezi Pyrope. They are friends to enemies to lovers, and I did say that in the right order. Vriska seems to measure her own self perception to some extent by how Terezi views her. She’s way more insecure than she wants to let on, constantly seeking attention and approval in the way abused kids do. Part of that involves latching onto her best friend’s perception of her. Vriska wants to do the right thing in my opinion because ultimately, she wants to prove to Terezi that she can end up doing the most just and right thing because it’s what she’s meant to do.

Jonaya: Vriskas are, without exception, contentious characters. Both within the context of the narrative and in the broader context of discussion of the media, Vriskas inspire arguments wherever they go! There’s no such thing as a “safe” Vriska who everyone just kind of gets along with - this isn’t Kanaya we’re talking about here! See, one of the things about Vriskas is that they cause problems on purpose! It isn’t just about the contention the character inspires, but the fact that it’s ultimately the result of their own choices.

Bucky: Also, one more important thing: Vriska is kind of oblivious. She’s certainly not unintelligent or uninformed, but she just genuinely does not notice things that are pretty goddamned important because she already has an idea of how things should go. This ranges from “Thinking Kanaya had a crush on Tavros after the Pupa Pan incident went down” to “Not realizing your fairy dust trail will lead your biggest enemy back to your base to murder all of your friends.” I love her. She’s also an idiot.

Jonaya: Shoutout to Sin for that one.

Bucky: So, who are some of your favorite Vriskas in media?

Jonaya: A great example of how a character can evolve to reveal themselves as the Vriska is Vanya from The Umbrella Academy. A character that starts off unassuming, with their role in the story obscured, gradually revealed to fit so many of our Vrischaracteristics! Vanya is a case study in how sometimes you can’t just go with your gut and have to look at a character’s arc over the course of the story and tease out the aspects of their character that truly make them the Vriska.

Bucky: Someone like Vriska is Trish Walker from the Netflix Jessica Jones television show. She’s initially unassuming, almost like an Aranea, but she’s constantly in and taking the spotlight, and really, she does it for herself. She’s also pretty damn devoted to Jessica, doing practically anything for her. On top of that, she throws herself into situation after situation she seems to get out of only due to sheer dumb luck. And honestly? She’s a little bit of a rich bitch! Like a Vriska usually is!

Jonaya: Probably my absolute favorite so far is Maeve, from the Westworld TV show. Constantly seeking to move herself into a position of knowledge and power to fulfill her own destiny, Maeve shares undeniable parallels with our favorite cerulean thief of light - to the point where we assigned her an identical classpect! She hits almost every single one of our criteria and we get to see enough of her character to really dig into her similarities to Vriska herself. And unlike some characters where we see only those surface-level similarities, we’re shown a rich internal characterization that allows us to analyze her on a deeper level. So what does this all mean?

Bucky: We basically wanted to do two things: Summarize how we approach Vriska as a character, and contribute to the ongoing discussion of the importance of Vriska. Over the course of our podcast, we haven’t identified a lot of female characters who fit into our idea of what a Vriska is. I got fed pretty well by the wildly varying types of women in Homestuck, and going anywhere else feels like a let down almost every time. I want to keep pointing out who the Vriska is in the media we consume because I want to start noticing when more and more of them are women, and allowed to be messy.

Jonaya: Vriska is a contentious character, and we’re hoping that by breaking down how we identify a Vriska, we can add to the wider body of Vriskanalysis and maybe, someday, even see the creation of an entire field of Vriskology.

Bucky: A character that is surrounded by discourse because of all of the different ways her actions can be interpreted isn’t an idea unfamiliar to fandoms, and we’re hoping this dive into what this sort of character can be is useful to the larger discussion of contentious characters and messy women.

Jonaya: Diagnosing Vriskas is just one way we take the metaframeworks laid out in Homestuck and apply them to other pieces of media. We’re really interested in the kinds of conclusions about stories we can arrive at by doing this, and hope this was a fun exploration of what that can entail.

Bucky: Thanks for joining us on this journey, and remember...

Jonaya: Maybe the real Vriska… is the frenemies we made along the way.