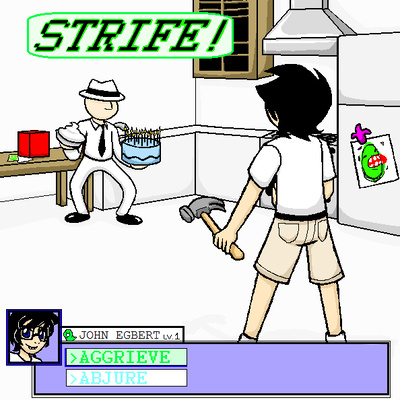 I created the first verison of my Showtime remix back in September 2009 shortly after I started getting into Homestuck, it seemed to go down well and a few months later I was invited to be part of the official music team.

Since then I feel that I have improved significantly and so I've given the old remix a quick reworking. Whilst I think that structurally the track is a little too similar to the original and if I were to make another remix I would do things quite differently, this piece was the one which began to outline my chiptune style which I've since developed with my other Homestuck tracks. My main influences with the chiptune are from the SID and Yamaha chips found in the C64 and Sega Mega Drive respectively, and as such many synth and percussive elements from each can be heard in my work.

To fit a remix of one of my favorite Homestuck themes, I wanted to make the Strife scene between Dad and John in my own style, while still holding somewhat true to the original. A remix of the art as well as the song.