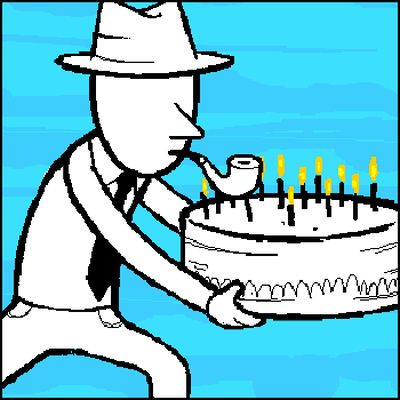 Probably the first bit of music accepted for HS (The piano version came afterwards but was used in the comic earlier). Difficult to fully recall what was going on with this one, but from what we knew about John at this point (i.e. Bit of a prankster, likes his movies) there was something about the name and the melody that just fit.

Early on in HS Music dev, Andrew would basically announce "Need boss music for upcoming battle: go!" and we'd all whip up some music and present it. These days that doesn't happen any more (larger team, ludicrous amount of already made-but-not-used music) but back then it was a fresh slate. I personally whipped up 3 30-second 'Looping boss battle music in the style of NES chiptunes' as per the original request. (I think it was Andrew's idea to start things off chiptune style and we've been evolving since)

The other 2 unused tracks (Which I still have somewhere) were ok - One was very piratey but quite sinister, the other was incredibly evil sounding, but Showtime had that initial-boss 'fun-ness' to it and apparantly just hit all the right notes.

The melody itself is very simple: It's just a square wave doing some broken chords. For the album version we were told to add some bits to the loopable tracks to make 'em 2 minutes long and have a proper ending, so the album features an intro and second part with a little solo.