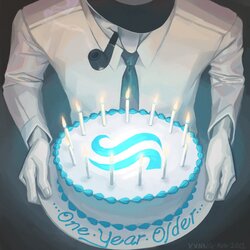 okay first things first
I
MADE THIS
FOR YOU

Yes you. The one sitting at their computer or phone or other gadget, you the one who's doing their hair or putting on flair like you just don't care, you the one sitting at a desk or laying in a bed or even hiding from the cops, I don't really care, this was made for you. It's been worked on over a long period of time (technically almost two years!), it's been delayed and pushed back, it was actually not even going to come out for a while, but here it is. And I'm incredibly thankful that you, whoever you are and whatever your interest, are spending the time to listen to this music.

So what is this, then? Well, back when the Homestuck music team was all jumping on the concept of "solo albums", I said to myself, hum, why not do one? The original concept was incredibly vague, because I'm not a very imaginative person most of the time, an album for John Egbert that used piano in most every track to some degree. And after a few tracks were made, a more specific idea began to emerge, that of an album sequentially examined moments in his journey through SBURB, music for key points or just for scenes. I even graphed the entire (known) timeline out on a giant piece of paper and plotted it all out. It's turned out to be far more ambitious and broad of a goal than I'd originally planned for, especially with how "key events known" slowly eclipsed "key events to unfold" over time, but I feel confident enough about how this album has turned out that I'm not too worried. And if anything, that means more music has come to you.

Now, before I start rambling at length about the music in here, I've got to toss out a few "thank you"s to people.

First, to all the artists that helped out with the track art. The stuff that they've all given me is just incredible, and if you ever ask me what my favorite part of this album is I would defiitely say "the art". I may be biased. There's full versions of all the album art with the album itself, and I'd highly encourage you to give it a look-over and see what else these talented people have put out.

Second, to the other people in the music team, who've helped me go from "some guy who uses famitracker and an awful microphone" to "somewhat of an okay digital musician". I'm thankful for every bit of critiquing I've gotten, too, even if I can be really stubborn about it. And all the bros I know in there, if I could meet everyone in person there would be endless fistbumps. You guys rock.

Third, to all the friends and people I've met over the years, through Homestuck and otherwise, that've been great to hang out with and chill with and just talk about stupid random things with.

Fourth, to my family for always being around, and for....well, being family. Keeping me alive and healthy and stuff and keeping me from completely failing in this "life" thing.

And lastly to Andrew Hussie for creating Homestuck, making the really crazy decision to bring me onto the team in the first place, and for giving me the opportunity to both make an album and just make music for him in the first place. I don't know how little I would've composed if I didn't have Homestuck pushing along, both giving me a reason to write and things to write about.

Alright! Now that all that before-album talk is done with, it's time to get into the album proper. I hope you, out there, enjoy this album, and I'll see you on the flipside.