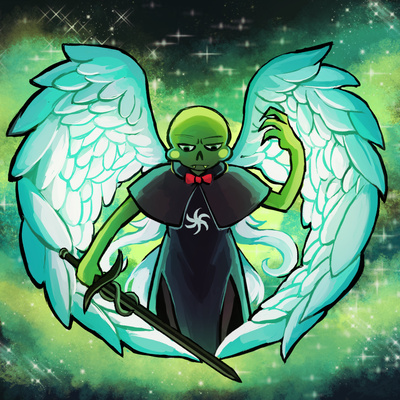 Limelight was made for the unfinished Act 8 fan continuation of Homestuck, and was used in the flash [S] Resolve. It's a theme for alt-Calliope, as she merges her soul with Davepeta's and the other half of Gamzee's, hence the meows and the high-pitched Secret Honks in the middle section. The working title was Miss America, because it's like, the opposite of Lord English? Shoutout to whoever came up with that one on the Act 8 team. This one was suepr fun to make since I got to use a lot of wacky sampling techniques and also I just love Calliope a whole god damn lot okay.

Like the song, this fantastic art was originally used for Act 8 Volume 1. It's a pretty stark contrast to the carefree art for Glide immediately before it; Alternate Calliope has now taken off her hood, with a look that indicates that she means business.