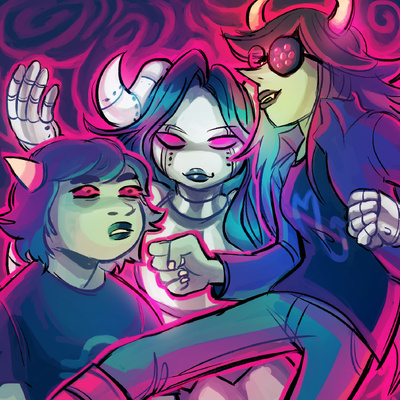 Probably the thing I’m best-known for off of Volume 5, which is slightly ironic given how rushed it was. No kidding, I finished it up the night that Hussie was rounding up tracks to go through, and threw it in as a last-minute thing, “hey I just finished this can it go in??” deal. I mean, I’d had inspiration for it earlier, but never got around to making it until it was almost too late!

Yeah, this one definitely had inspiration. To answer a quick question you might have though, no, I didn’t know about the trolls beforehand, or what Hussie was going to do with the music. I didn’t even find out until Albatross Soup told me about it, a few weeks before it happened. Moreso, the inspiration came from a sudden image I had one night during the summer, in which Jade’s planet, at that time unknown, was highly unstable, and Noir had purposefully upset the balance in order to try and destroy her planet. So the entire first bit is her trying to save her inhabitants, while Crystalanthemums plays. The reason for having that motif, well, I’d had this very strong feeling that it should be Jade’s planet theme. So, it got used.

(The mental images of one of the kid’s planets getting broken/torn apart like I’d imagined still give me the shivers. I still love Hussie so much for creating a villain that actually did something upon gaining obscene amounts of power; rather than just retreating and launching some master plan, he actually went around and started doing shit with his powers. Not something you even really see in Hollywood villains nowadays, far as I know. The protagonists and antagonists are always very separated, no interaction between one or the other, nothing like what Noir does. At least, that was my experience at the time.)

As for the second bit, well, I’d wanted to make an “industrial, heavy action, stuff going to shit” remix of Perrybob’s Mannequin for quite some time, and it seemed to fit to transition over to that. In my head, the action was going to shift from Jade’s planet to LOHAC, where unspecific action was going to take place. I really don’t think I gave the Mannequin section enough time to develop, or really do much, but time constraints dictated I give the music over to the volume 5 collaborative -right then and there-, so it had to be cut off. Mannequin’s really great, though, you should give it a listen.

Also, as a sidenote, my like for Beck is rather shown in this piece, as is evidenced by my direct attempt to semi-recreate main beat in Replica to transition between the two sections. #MUSICSECRETSSSSSSSS