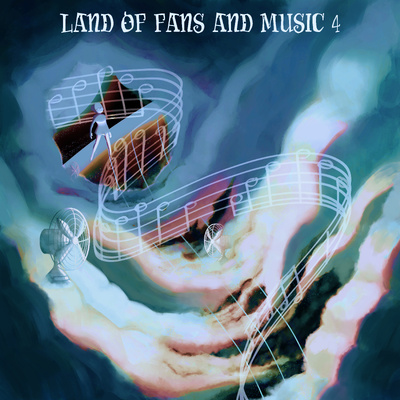 LAND OF FANS AND MUSIC 4

Hey, so, I'm Lambda. I did like 2/3 of LoFaM2 and a little bit of LoFaM3. I also made that list of references that comes up if you google "Homestuck remix list".

Anyway, this is LoFaM4. It's a pretty good album with some pretty cool songs. I hope you like it. I'll be popping in to give some extra ocmmentary on songs throughout the booklet.

I'm using the rest of this space to thank a bunch of people, starting with my collaborators. Thanks to Liza and Scott for sticking by my side for so long; to Aris, Emily, and Lathan for stepping up to judge and being awesome friends; to Makin for doing a ton to get this album out; and to Caitlin for... existing.

I think that's pretty much all I have to say? Enjoy the album.

This is not so much an end as a new beginning.

Homestuck music, to me, has been an ever present part of my life for six years now. I can still keenly recall switching on my iPod Touch to the original Land of Fans and Music as I travelled into university for my first year of higher education, the excitement I felt in getting one of my own songs on the second installment and the deep pride I had in bringing the third album to fruition. The Land of Fans and Music has always been a celebration of the best of Homestuck fan music, a collection of musicians that continues to grow from strength to strength, doing things I could never dream of accomplishing.

But Homestuck is a work filled with passion, with creativity and ingenuity, and it is that spark that has set so many of its fans ablaze. Through transformative retellings like Cool and New Homestuck and Act 8, the songs of which have equally earned their places in the annals of fanmusic history, and innovative projects bringing light to untold stories like Beforus, Ancestral and Xenoplanetarium yet to come, Homestuck fanmusicians are always hungry for content on which to develop their musical crafts. It only takes a quick listen to some of my early Homestuck content (my tindeck is still mostly online, including those Nepetaquest tracks...) just to see how far I've been able to hone my own crafts through this medium.

However, it is time. As all things inevitably must, the Land of Fans and Music project is reaching its final limits. While it would not at all surprise me to see another small scale LoFaM 5 spring forth from the incredible pool of talent that I have the privilege to interact with on a daily basis, it is here that I personally choose to bow out towards my future horizons. While I will always be a part of this fan music community, I think I'm finally tapped out on my own Homestuck energy. (Thankfully, you can be freed of my disgusting motif potpourris. How many of those do I have now? Like... 4?)

This album would not exist without so many incredible people. Thanks must be givven to Lambda for spearheading the project, and getting the ball rolling in the initial stages. She is incredible at pulling everything these projects need together and I know this album would not be half of what it is without her. Thanks also to Cait for what she has done towards getting this album out. Hopefully this means no more long nights for me uploading hundreds of tracks. Thanks to Blackhole and circlejourney for what they've done for the booklet you're reading right now. It looks fantastic and is filled to the brim with amazing information. And to both circlejourney and nights, thanks must be extended for the high calibre of art this booklet is home to. To Makin, Aris, Emily, Liza and even Mark and Lathan, thanks for being a part of this process in helping us sort through the hundreds of tracks we received.

It's been six long years for me, but I finally close my own chapter on Homestuck fan music*. I wish everyone the best of luck in their future pursuits.

Yours in fanmusic, from now and forever more,

*Except for Violet and Gold. If I don't finish that, I think several people would have it out for me.