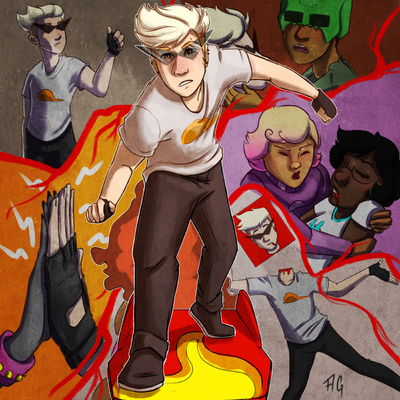 Written for the Cool and New Music Team's Cool and New Homestuck 2, this is an attempt to remix Unite Synchronization in a way that fits better thematically with [S] Dirk: Synchronize and [S] Dirk: Unite. Some of the things I worked in were Orange Hat when Dirk wakes up, for example, Metamorphic Choices when the kernelsprite appears, Hate You for Meenah's cameo... Dirk's scateboard-riding I represented with Moshi Moshi?, a theme that's admittedly been a bit of a stickymotif for me (I've used it in way too many compositions). I like Moshi for an umber of reasons, not the least of which is the fact that it goes so well with so many things. What can I say? I like mashing themes together.

An illustration of the events of both [S] Dirk: Synchronize and [S] Dirk: Unite. As can clearly be seen, the Red Miles tore up the spacetime continuum, resulting in all the events happening concurrently. This is exactly what happened both here and in the flashes, and definitely isn't just a clever tactic by dazed-squid to create a pretty neat track art that depicts a lot of the best parts of said flashes.