The Baby is June 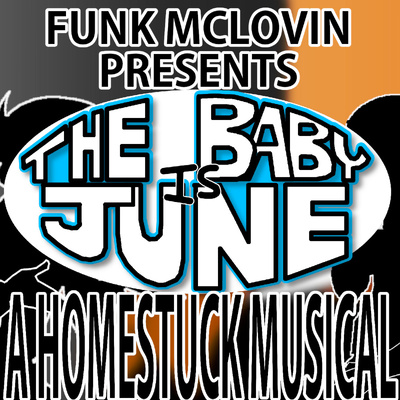 JUNE: i hope dave is okay.
JUNE: what do you think will happen if something goes wrong?
JUNE: what if i evaporate, like in back to the future?
KARKAT: IT'LL BE FINE, JUNE.
JUNE: but i've been hearing trumpet playing from the delivery room this whole time.
KARKAT: NO DON'T WORRY, THAT'S JUST THE DOCTOR FROM TRACK FOUR.
JUNE: oh, right.

He's a good dad
So we'd better hurry
And pull ourselves together, here's why

DAVE: well folks great news
JUNE: oh, dave! thank god.
KARKAT: DAVE, LOOK AT HER.
KARKAT: IT'S A LITTLE JUNE.
JUNE: i'm still not entirely sure how it was born with my glasses on...
DAVE: i have some bad news
KARKAT: WHAT IS IT?
JUNE: what do you mean?
DAVE: to preserve the time loop this baby has to go back in time and live your childhood june
DAVE: we cant keep it
KARKAT: ...I GUESS THIS IS OUR ONE CHANCE TO SAY GOODBYE.

DAVE: well
DAVE: that was weird
DAVE: i gotta admit im kinda sad that i didnt get to raise a little june
JUNE: i'm not...
KARKAT: WELL, AT LEAST WE LEARNED A VALUABLE LESSON FROM THIS.
DAVE: we did
KARKAT: SURE.
JUNE: what was it?
KARKAT: I DON'T FUCKING KNOW.
KARKAT: BUT I'M SURE SOMEDAY IT WILL COME IN HANDY.
KARKAT: LIKE SOME OBSCURE TRIAL WILL HAPPEN IN THE FUTURE AND WE'LL BE ABLE TO DRAW ON OUR COLLECTIVE KNOWLEDGE OF THE MECHANICS OF PARADOX IMPREGNATION.
JUNE: it's kind of like jesus, huh?
JUNE: a virgin birth.
DAVE: definitely not a virgin
KARKT: WHAT'S A VIRGIN?
JUNE: man, i wonder what would have happened if i'd chosen meat or candy.
DAVE: good question june buddy
DAVE: i guess the world will just never know
[Laughter.]
JUNE: probably for the best.