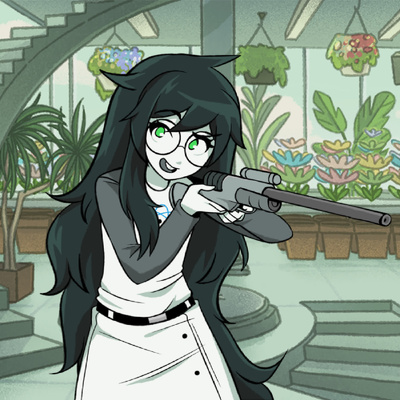 i always really liked carefree victory and its really one of the only songs that felt like uniquely hers. towards the end i try and do something that like... every homestuck musician i think tries at least once: getting all 4 of the kid's instruments to play something nice together. i think i did alright, i subbed in beatboxing for daves turntables cause its not like you can just carry those anywhere. i guess as opposed to johns piano?? LMAO

musically i have jade start on bass, and as more of her friends come in she gets a little more confident in her basslines. anyway thats my fanfic.

this is the last new piece i'll be doing for the forseeable future, or until i feel like doing another one which might be immediately. ive been doing this on a largely volunteer basis for a while since the budget constraints were tight and we need to pay the bg and sprite artists a reasonable amount. I wanted all four kids to have music by me and i think we'll be digging into the homestuck archive for other stuff.

anyway i hope you've enjoyed the ride! its been a little bittersweet at times for me but i'll miss posting new stuff every two weeks.