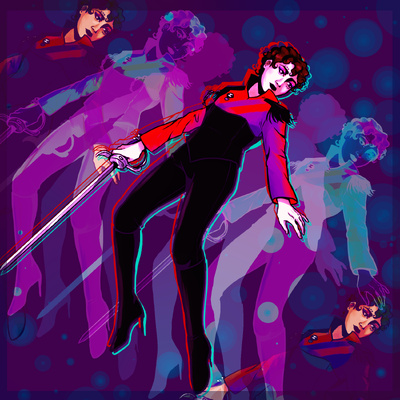 O darling, what have we become?
Has all been said, has all been done?
And after all that we’ve been through
Am I still me, are you still you?

O darling, what is it we seek?
Perhaps I think myself a freak
Perhaps I crave a second chance
In the universe’s endless dance

Moons of Theseus is an album idea we had lying around from before UnofficialMSPAFans' recent year of 0 content, and it's a project a lot of us had been looking forward to for a long time. Fitting, too, that it's named for the paradox in which every piece of an object is replaced gradually until it has nothing physically in common with its original state. The idea for Home we had back then is nothing like what you hear now. SplitSuns and I didn't know what we wanted back then, beyond "Oh hey, you want to make a tribute to Forever? Me too!" It's safe to say that little to none of that initial desire to reimagine Mobius Trip's overture has bled through into the finished product, but it's safer still to say that this song wouldn't be possible if it had been approached any other way. That's not the only thing that's changed in the meantime, either: since we initially promised to collaborate on this, we've both improved as composers and producers, and our styles have evolved, our influences are different, and the zeitgeist of what it means to be a Homestuck fan, particularly a Homestuck music fan, is practically unrecognisable.

For me, making Home was one hell of an experience. I taught myself a lot of new techniques while co-writing and co-producing it, and I'm proud of it in a way I've never been proud of anything else before. Much like the song itself, I'm no longer the same weedy, slightly annoying kid who made a bunch of tracks on Weird Puzzle Tunes. That kid couldn't dream of making something like this. Strictly speaking, I couldn't either. This was a team effort with one of the best friends I've made through UnofficialMSPAFans. So a huge thank you to SplitSuns for pushing this song to its maximum potential is in order, as is another to our two fantastic vocalists, Ucklin and WHATISLOSTINTHEMINES. I also want to thank all of the friends I've made through Homestuck music, and by extension, the comic itself. I don't think I'd still be making stuff with this project without your love, kindness, and good humour.

Maybe this is narcissistic (or at the very least, laughably ambitious) for me to say, but I hope that when you listen to Home, you hear some echo of the past or other that resonates with you. I also hope that it feels like something you've never heard before. Much like the titular ship of Theseus, the form has been made anew, but the essence is the same as it always was.

I honestly can't recall exactly when the first time Grace and I discussed our love for Forever was, or when that love transformed into making a full-blown tribute, but over the many, MANY months, our pact to realize our emotions in song finally came to fruition. This is the first time I've done such a large-scale collaboration, and it's safe to say that it exceeded all my expectations. Neither of us thought that a track tributing a three minute opener would turn into a multi-part 10:25 epic, but life tends to have ways of surprising you. It wasn't easy balancing the track's complexities, which is why I was beyond grateful to have Grace help out with organizing things. This song would not be what it is without her; it wouldn't even exist at all, really! Her skills cannot be overstated.

The first components of the song were completed by Grace. She wrote and composed the lyrics for the vocal section, and produced the majority of the guitar breakdown/climax towards the end of the track. From there we planned a road map of the song's progression to link together what had been completed: an ambient intro similar to Forever, a transition to lead into the vocal section, the vocal section, another transition to lead to the climax, the climax, and then an ending. I produced the majority of the intro and first transition, with Grace providing additional production and WHATISLOSTINTHEMINES playing live guitar! My goal was to create a composition with the same sense of scale and drama as Forever while having a unique mood, playful and hopeful all at once. I produced the vocal section to match Grace's songwriting, with additional production from Grace; MINES' lo-fi strains contrasted with Ucklin's ethereal melodies very nicely, right on top of a groove I never anticipated coming out of the project. The second transition was done entirely by Grace, bridging the gap between the dance that came before and the cinematic breakdown coming after. Finally, I provided additional production on the climax and created the ending. We wanted something like, in Grace's words, "the digital-age counterpart to the end of Have a Cigar." The result was a little bit more violent than that, but it provides a thrilling conclusion to the experience all the same, jettisoning off into the Incipisphere.

The varied parts of Home take you by the hand and guide you on a journey throughout time and space. It is my belief that by listening, you're taking the same journey Grace, myself, and all the other creatives involved in this album took in the process of making the project a reality. It's been a long and winding road, but I wouldn't have had it any other way. Thank you.