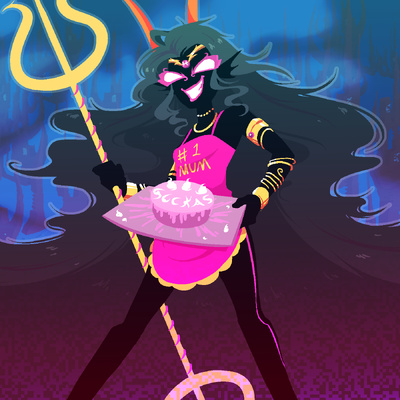 The idea for this song started with the transition around 2:35 to the section with Hate You played in a straight rhythm. I wanted to capture a feeling of dread by making that part of the song methodical and delaying the payoff of some of the notes by a beat. It would also be a stark contrast to have this straight section in solo piano right after a climactic section with plenty of instruments in a swing beat! I was inspired to incorporate a musical palette from the 30s-40s because that's when I estimate Condy took over as Betty Crocker and started doing her guardian things. In the original song, I planned for the bass to carry most of the weight with regards to rhythm, but eventually, I was persuaded to add percussion to the track after helpful feedback from a few of the organizers, and I think it helped a lot! Hate You is quoted 3 times, although the first two ended up a bit disguised by subsequent layers of instrumentation.

With regards to the rest of the composition, I tried to have fun! In a way, this song is supposed to tell the story of The Baroness. The beginning hook and the next section portray the mask she wears as Betty Crocker upon arriving to earth, and the persona that caused her husband Colonel Sassacre to fall in love with her. That part of the story is pretty funny to me. The following section introduces the mystery of her real identity with a jazzy Hate You quote before returning to the first section, and finally the climactic transition of the song represents the death of Colonel Sassacre and the beginning of Crocker's reign of terror proper. Finally, at the very end of the song, there is a piccolo harmony which just sounds like aliens to me, possibly because it sounds a little like a theremin. I learned a lot composing this song! Thanks for listening, and I hope you enjoyed! (And thanks to nights for art more polished and gorgeous than I could hope to deserve!)

This very nice track gave me vibes of a casual setting with the condesce, so I thought to draw her doing a mundane but fun task - baking! I've always liked fanart of HIC as betty crocker, doing crockery things like baking cake and raising post-scratch john/jade.