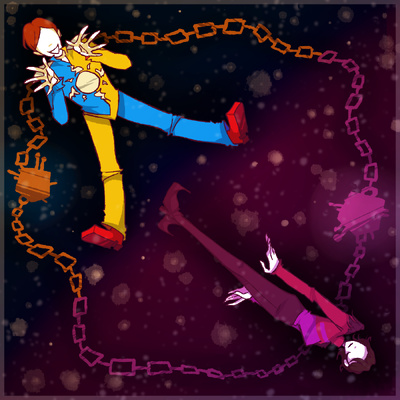 Tracks that The Return references:

Tracks that reference The Return:

This song has quite the history to it! I made it back in July of 2018 for the Cool and New Music Team's "Volume 11" project, a plan to make a fan-made meme-filled image of a fake Volume 11 from the Homestuck Music Team's Bandcamp page a reality. All the songs, including a 12-hour "extended" version of Penumbra Phantasm, a rock opera made out of Michael Guy Bowman memes, and a sequel to the Baby is You, were painstakingly produced based on the ideas (and jokes) the track names suggested. Each song's length was the same as it was in the original image, and photoshopped reviews were even added on the album's page using dummy accounts!

For my song (originally called "The Return of Mobius Trip and Hadron Kaleido") the team was planning on playing it straight and producing a medley of songs from MTaHK. I went with their idea and made a mega-mix of every song on the album, with the caveat being it had to be 6:12 long exactly! I first planned out the structure of the song on a single piano track to make sure it fit the time limit, then went back in and fleshed out all the instrumentation. I wanted it to be reminiscent of Bowman's work, with his classic guitar flourishes, but put my own spin on it all the same. The whole project kind of crystallized over the course of a single week I spent stuck to my computer 24/7, continually tweaking it to make sure the track flowed despite its disparate parts. If you're interested to find out more about its production process check out this video.

All in all, it's a fast-paced schizophrenic redux of the highlights of MTaHK (which is to say, the whole album) that even now I'm still proud of. I'm happy to have the opportunity to put it on this amazing album!