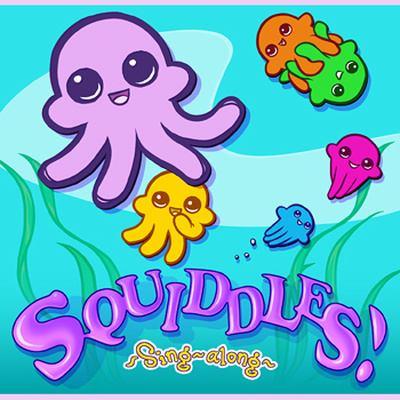 Tracks that reference Squiddles in Paradise:

Squiddles down in paradise invite you to play
They're tangled up with joy and fun every single day
It's a silly kind of life they live, but for them it's nothing new
They are friends with everyone and they love you!

It's a funny time in paradise with their Squiddle friends and more
So let's dive on in and we'll go see what they have in store
We'll ride up on sea unicorns into uncharted lands
Watch out for Skipper Plumbthroat! And his salty band
(Bye Skipper Plumbthroat!) (I'll catch you yet!)

It's a lovely time in paradise, see the Squiddles smile with glee
We should join them in the fun they made for you and me
'Cause soon enough we'll have to leave, and depart for shore
But we'll be back another day, on the ocean floor!

My vocal debut, and what is it? Me mocking the music kids shows. It’s an adorable song, though.

Okay, so this one actually has a bit of history, quite a long time before Homestuck. I’ve been at this music thing for over 9 years after all.

Originally I was interested in writing a sort of uplifting and mellow hip hop song, and the first thing I did was make an organ synth with a swung version of one of the melodies you hear in Squiddles in Paradise. I was actually working with AndrewNeo (him again!) on the song.

Of course, that never panned out, but when I finally felt like I should contribute to the Squiddles album (I was among the last to actually start something) all those years later, I remembered that melody.

And then Alex told me the whole hip hop feel, even though it was pretty relaxing, just wasn’t gonna work. So I reworked it into a pretty cheesy and stereotypical reggae song and just stopped caring altogether about how it sounded. I mean, come on, it’s a freaking parody album!

Eventually Alex recorded some Squiddle vocals for it because I thought it’d be hilarious, and he sang (badly out of tune on purpose) the chorus. I thought it was brilliant and promptly wrote a full set of lyrics.

TLDR, the chorus to Squiddles in Paradise was actually made up by Alex Rosetti basically on accident, and the song was originally some hip hop song I did over half a decade ago.

Well, what do you know, my vocal debut?

This song has a remarkably old history to it, elements of it dating back to 2005, not too long after I started using FL Studio. Originally this was a sort of uplifting hip-hop song that I did in collaboration with AndrewNeo, but the song was never finished. I’d share the song with you, but unfortunately I don’t have the plugins I used because back then I didn’t care as much about pirating VSTs and the like.

Nonetheless, do have a little snippet of what I did with that hip-hop song when the Squiddles album was starting up, which is not too different from the original, aside from a more interesting beat and bassline. (dead link)

I sent it over to Alex Rosetti, but we ended up agreeing that going with the hip-hop style. Even though it was a pretty relaxing song, it wasn’t going to be a good fit for what Alex had in mind for the album.

Thus, I scrapped it and started to work on other songs before coming back to it almost a month later.

It hit me one day that I should try rewriting the song in a really ridiculous, cheesy, and cliche reggae style, and completely not care. So I did.

I again sent this to Alex and he really liked it, and he quickly recorded some Squiddles very horribly singing what eventually became the chorus. I thought it was brilliant and was immediately inspired to write lyrics for the entire song, which really helped flesh out everything. It also let me use Radiation’s hilarious Skipper Plumbthroat voice briefly, though that went uncredited in the song, hah!

And after some work, I arrived to the final song that’s on the Squiddles album.

Michael Bowman once mentioned that Squiddles in Paradise is one of the few songs on the album that really balances the act between a legitimate song and a downright silly song. I was pretty flattered when both said this and when he recommended this song, among others from the album, to a fan.

I actually have to agree with Bowman after looking back at it almost two years later. Despite how little effort I feel that I put into this song, it was a really fun and silly song to write… about kid-friendly horrorterrors… in paradise.