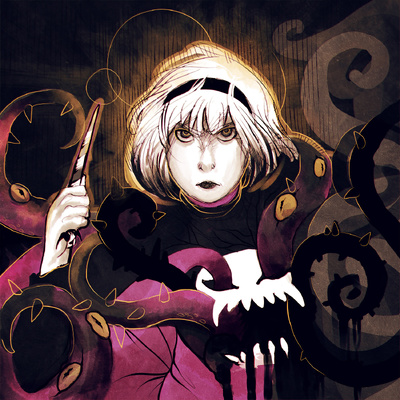 This track was made for the Cool and New Music Team's Volume 7. It was based on the hypothetical question "What if Rose went grimdark?" which was based off of a series of shitposts on the /r/homestuck subreddit. With this song, I tried to make it mirror the chain of events that occur to Rose before and after she goes grimdark in the comic. It starts off relatively simple, but quickly goes ominous and unsettling as she stares into the cueball in "Seer: Ask." Then suddenly the song explodes into a blistering drum-and-bass track with booming organs to tell you that, in fact, shit just got real. The song was meant to be reminiscent of "Your Best Nightmare" from Undertale, and I hope I was able to pull that effect off. The song concludes in much the same way it began as Rose, in her newly darkened state, flies into space. All things considered, I had a lot of fun making this song.

This track received brand new art for its release on LOFAM4, courtesy of the talented Neiratina! With this song portraying Rose succumbing to the broodfester throes and going Grimdark, this art features Rose beginning to slip away to the eldritch Horrorterrors as well. WIth her wand gripped firmly in hand, Rose looks fiercely determined to destroy anything in her path. Her aura of golden is inexorably being snuffed out by the black tentacles that pour out of the image, even interfering with the designs in Rose's shrit and snaking their way into the background. Marked with jagged lines and dripping ink, this piece perfectly caputres Rose's last moments of innocence as she throws caution to the wind and turns herself Grimdark.