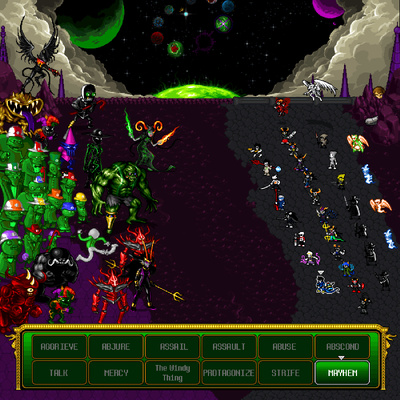 This song didn't actually start out as a Homestuck song when I was first making it. It went from tune stuck in my head, then into a random song that I was calling Metallic Mayhem, then into Flare, then into a practice into motifs, then into what is now apparently my most popular by far!

I have wanted to do something like this for a long time. Final Fantasy 6 is a big inspiration for me, particularly the in-battle sprites and backgrounds. Homestuck, with its numerous great designs, seemed like it would be really fun to render in this style. When I saw Strife Mayhem on the song list I knew what I had to do--a large-scale battle with lots of characters to match an amazing battle song with lots of leitmotifs. I pulled a few elements from my previous track arts which were sort of stabs in the same direction, particularly the background from Medium and the handmaid from Maidswap. The GUI is also a bit of a reference to the previous track art for this song on Cool and New Volume 7.