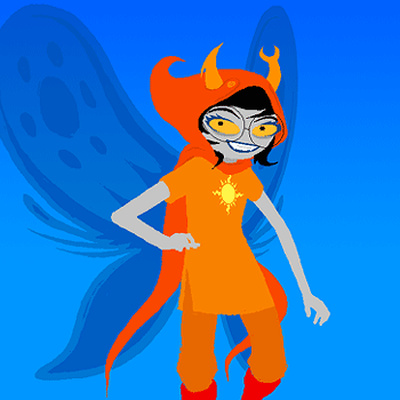 It’s a chill drum and bass song, and one of my best productions for Homestuck. It was also my first remix since I made that Skaia remix.

Have I mentioned that Alex Rosetti’s compositions are pretty incredible? They are. You should go give him some love.

Woo, my first official remix since my Skaia remix on Volume 5!

So as I’ve probably mentioned, I’m a huge fan of Alex Rosetti’s work, and this song is absolutely no exception. I had been wanting to do something with Crystalanthemums since first listening to it. Coincidentally, it immediately proceeded my Skaia remix.

At the time, I really had no idea on who anyone was on the team, so it never really sunk in that I should do that remix until December of 2010.

Obviously at this point I had gained an interest in drum and bass music, which explains the sound, yet I still had a very soft and ethereal sound reminiscent of the original song.

Of course, I really pushed the energy up, which made it a lot of fun. I jokingly said to Alex after Volume 6 came out that while his song was at the top of the echeladder, my remix was god tier, in part due to Vriska in her God Tier outfit being there. :D

Anyway, on to the song.

So the song opens with a really interesting sounding ostinato, which is actually the same notes that open Crystalanthemums: E, D, B, A, E, D, B, D.

However, I really gated the length of the note to make it become such a short blip that the sound barely registers. On top of that I gave it a delay and combined with the gate it sounds nothing like the original motif.

And then when I open the gate on the note length you hear the ostinato faaaaar better.

A lot of people missed this, actually. :D

I have to say I really love the chord progression Alex went with in Crystalanthemums, and it was incredibly fun to make that bassline, which is actually a layered bass, but not a note-for-note bass. This is actually a pretty common thing to do, with the lower bass just playing simple sustained notes, and the higher bass is more animated.

Though I’ve definitely grown to prefer warm sawtooth basslines, this bass has a really nice quality that’s almost a square. The filter based attack is pretty sweet sounding, too.

I really was happy with how the drum beats layered in at 2:16, though honestly, I was really out of practice of doing any sort of breakbeat stuff.

Fun fact, this was the first song I used Gross Beat on. What’s Gross Beat? It’s something a Time Lord of Gallifrey would approve of in music. :D If you listen to the stutter effects heard in the song, mostly in the latter half, that’s where I start using Gross Beat to do some crazy time shifting stuff.

Man, I really love what I did on this song.

...I need to do another Homestuck remix, don’t I?