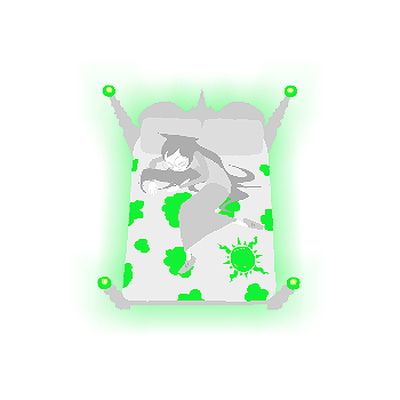 Anyway, man, where to begin on this one? My most famous song, one of the proudest moments of my musical career, etc. etc. I could go on.

But I’ll start with the roots.

Remember that image? Yeah. Okay. Now then, go listen to the first 30 seconds of Frost while staring at that image.

That’s how it started.

And then Andrew asked me to use it in the animation and it got renamed. But, considering half of the song no longer fit the new theme, I rewrote the second half to include a lot more percussive instruments to give that icy feeling.

Frankly, I’m not sure what’s more well known, the really ethereal arpeggio that opens the song, or the industrial drums that drive it.

I can’t really make a post about this song without mentioning the above flash animation and the following image:

Because, really, if I didn’t, I wouldn’t be explaining a significant amount of the story behind this song.

This image of Terezi standing in the Land of Thought and Flow is what inspired the opening arpeggio for Frost. The whole Land’s environment is fascinating to me, and I simply had to write a theme for that medium world. As I have probably mentioned, my preference in writing music is for settings, which gives me my really ambient sound, contrary to other musicians on the team who prefer to write melodical songs describing emotions and people.

I ended up realizing an industrial kit would work extremely well for an unusual drum beat, particularly to contrast the incredibly ethereal sound I had already established. Hell, this song is so ambient people have a hard time telling what the melody is… and no, it’s not the french horn. :D

Eventually the arping bassline comes in and all is good.

Anyway, I was really hoping that Terezi’s land would be explored more, but that never happened. I ended up getting contacted by Andrew to feature this in the comic, and I was really ecstatic. My music went from a few dozen people listening to it regularly, before I joined the team, to probably a few thousand after Volume 5. And then with this feature, I jumped to having hundreds of thousands of people listening to one of my songs. And it’s grown since then.

That was a really mind blowing, and really awesome. I’ve had very few proud moments in my life more worthy than this one.

After the feature, though, I scrambled to improve the song’s quality. I changed around a few things in the first half (most notably making the whole mix a bit quieter), and pushed the melody a bit more forward. The second half, I basically swapped out this very strange sounding piano improvisation I did with the percussion (vibes, glockenspiel) instruments and a saw pad for lead. The replacements work incredibly well for trying to give an icy sound, and I’m pleased with how it turned out.

I don’t know if I’ll ever go back to doing songs that are this ambient and minimalist, because my composing skills have progressed significantly since then, and I require much more complexity in my work. Also, now that this song is actually over two years old (for me), I’ve noticed how flawed it is.

But nonetheless, this is probably one of my best songs, and it’s well loved by the Homestuck fandom. That’s good enough for me.