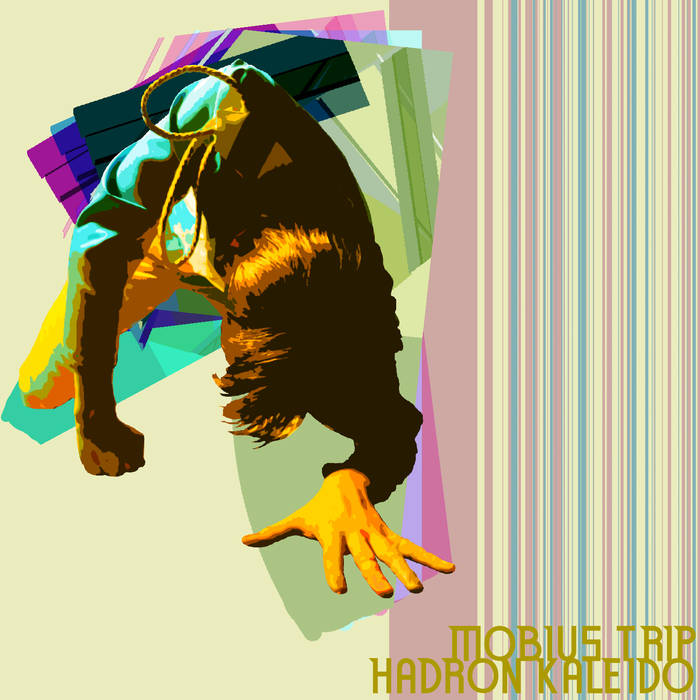 Mobius Trip and Hadron Kaleido, agents of Prospit and Derse. They once fought on the battlefield as their respective nemeses, only to be united by a common epiphany - the truth behind the Ultimate Riddle. Gazing upon the Skaian clouds, the secrets of the past, present, and future are now well guarded by these strange sentinels who spread enlightenment through their cryptic music and dance. Together, they hope their songs may be a beacon to all those who undertake the Riddle.

Is there a linear story to this album, or is it some other form of story telling?

I've seen a good handful of questions like this and I'd be glad to clear this up. This album does have characters and a story behind it, but it is not a linear story or a rock opera. It's an eponymous album by its members Mobius Trip and Hadron Kaleido.

Back when Andrew proposed the music project in March of 2009, he made it clear that one of the things he wanted to do was create a lot of "fake bands" which would exist as actual musical entities within the Homestuck Universe in much the same light as the Gorillaz, the Monkees, or the Chipmunks (wow, those are all animal names). While we accomplished that somewhat with albums like "Squiddles Singalong", most of the concept albums have largely been musical homages to the actual characters. For example the Felt didn't "make" their album of the same name, the music team made it as program music.

Mobius Trip and Hadron Kaleido is meant to be literally an album that Mobius and Hadron would make together. Like the Kernelsprites, they spread their knowledge of Sburb and The Ultimate Riddle cryptically through overtly complex riddles rendered as rock music. They have a seemingly limitless knowledge of all things in the Homestuck universe, or do they? For all their answers they don't just give anything away, they tease you with their songs.

How much thought did you put into connecting the album with Homestuck? Or was it just supposed to be a silly thing with a loose connection?

From the very beginning I wanted to make this an album for Homestuck fans, but I also wanted this to be something which could be listened to from the outside-in. My goal was to create a solid set of songs that would revisit the basic themes of Homestuck, meaning that the fans would get a whole new dimension to the world of Homestuck and listeners unfamiliar with the comic could discover listen to it and, if so intrigued, discover the entire world of MSPA to create context for the album. Think of it as the relationship between House of Leaves and the band Poe - there is intertextuality between the literature and music and together they create a bigger picture. Plus, you can discover them in whatever order you like.

Personally, I believe the album is very faithful to the basic ideas of Homestuck. All the big themes are there: time, eternity, repetition, survival, the unknown, fractals, betrayal, dreams, romance, hypnosis, pumpkins, etc. While I certainly had ideas for songs already floating around before the fake band project fell in my lap, my rule of thumb was to incorporate Homestuck any time I hit a dead-end and didn't know what to do. Plus, the process of planning the art was something that Tavia and I were working on from almost the very beginning.

how much of the instrumentation was synthesized and how much of it was organic? i'm thinking specifically of the fiddly guitar bits in forever

I play every instrument on this record, and all the ones that aren't real instruments I either played through a synthesizer or sequenced myself. All the guitar is real guitar played by myself. I did all of the singing except for some backup vocals by Tavia. About half of the bass parts are me playing an old P-Bass and the other half are some spectacularly vintage-sounding synth basses that I sequenced. While I do play drums, I was unable to use my drum set in the making of this album and instead spent an intense amount of time laying down the drum parts as the first step in making each track. Most of the performance side of the album was really quick and just involved running through the song and playing a midi keyboard run through patches.

Are there any intentional song similarities or specific inspirations, musically? Chain of Prospit reminds me a LOT of She Blinded Me With Science by Thomas Dolby, in a very good way.

None of the songs are supposed to sound intentionally like any other song, but my style is informed by the groups I've listened to that I really enjoy. I can see the resemblance, but when I listen to my own music I always hear a demolition derby of every song I've ever liked. All the things I've seen posted about my music being a mix between groups like Daft Punk, David Bowie, or They Might Be Giants really satisfy me because those are most of the same things I listen to.

I think I listened to "She Blinded Me With Science" a lot about five years ago. Thomas Dolby is a cool guy. I really like his soundtrack to Gate to the Mind's Eye.

Also any fun stories you can share from taking the pictures for the graphics?

For the portrait of Hadron's face, I cobbled together my little lighting and shooting rig with the following: tripod, camera, music stand, orange extension cord, nightlight, and a chair. It was super guerrilla, if you consider shooting in the comfort of your own home guerrilla. Either way, it was actually a very pleasant photoshoot that didn't require an extensive amount of time to set up.

Oh, and I kept eating cookies during one of the photoshoots.

That's all I can remember at the moment. Bowman might remember more.

Renowned for Sburban Jungle, his official solo album Mobius Trip and Hadron Kaleido and many other hit Homestuck releases, Bowman has gone on to create his own expansive personal discography since.

Next: Homestuck Vol. 7: At the Price of Oblivion