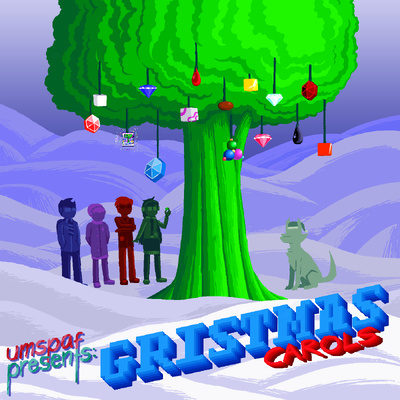 Tracks that reference End of Act:

From the seven gates of Skaia to the Battlefield
And the Land of Light and Rain you trode upon
Seven years of works Ascending, what it all revealed
Was a word that you could cherish standing on

Were your closest friends a part of what you’ve loved so long
Would you play with them a Session of your own?
Are they standing right beside you as you sing this song
Don’t you leave them through this season all alone

And we’ll meet you for another happy holiday
When the twilight stars you built upon have gone astray
Take your chances, take yourself along and get away
For your Ultimate Reward awaits you, don’t delay

Imagine me, young Flare, sitting at a piano when all of a sudden - BAM! Musical inspiration strikes! The melody always struck me from the beginning as rather festive-feeling, even if it didn't use the standard musical tropes for Christmas music, so I took this idea and set out to make the most Christmassy electronic music I could make.

The lyrics also only rather obliquely reference Homestuck; it's never mentioned by name, I chose the most mild-sounding aspects of the story to directly reference, and not once is conksuck or shit lets be santa dropped. But most importantly, the lyrics are for you, dear Homestuck reader, as a reminder that though the year has come to a close, though the act is ending, the future still holds many more in store for you. Your story continues on, so be its hero!