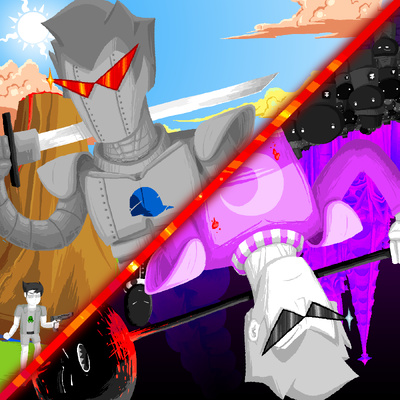 Thyme on My Fries

Tracks that Thyme on My Fries references:

This track was originally made for the Cool and New Music Team's "Cool and New Homestuck" project, remixing and parodying the various Homestuck Flashes. In case you can't tell, this song is a parody of Time on My Side. I mostly played it straight to the original song, changing the instrumentation and adding some twists of my own. Of course, there's some jokes thrown into the mix as well, such as the Crazy Frog theme song, Waters of Nazareth, and other subtle additions. All in all, I hope you like this song! It's good enough for Tensei to say "this is pretty good," so make of that what you will.

When I saw that Thyme on My Fries' art was still unclaimed, I knew what I had to do. This is the result - a love letter to the song and the Flash it's parodying.

I wanted to make the dividing line horizontal, but I couldn't get it to work, so I went with the diagonal split, which I'm happier with. I wanted the Dirks to look like a playing card - maybe the Suicide King, as it looks like they're decapitating themselves. The hardest part of this was Derse. I knew I could take the easy way out and copy some buildings, but I pushed myself to draw everything on my own. I'm glad I did; I think it's the best part of the piece. (See if you can spot some familiar faces in the crowd of carapacians!)

Oh, and thanks to Nights for finding the image of the sun for the line in the middle.