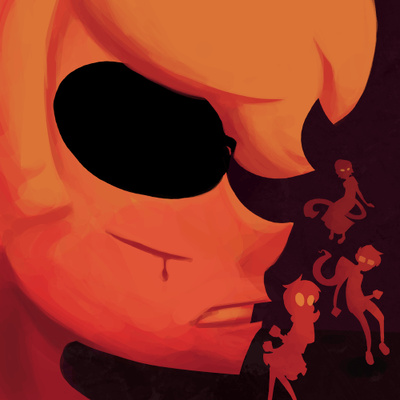 This was an idea borne of two things. Firstly the Dave & Jade vs Noir battle in the banner (Original title was 'Redshift'), and secondly a post-scratch Dave trying to regroup with all the kids (hence - 'Unite' - keeping to the kind of single-world direction thing HS has going for it i.e. Descend, Ascend, Cascade, etc).

The main premise was to have quite a hefty beat (Dave), bass - including a slap bass solo (Jade), piano (John) and violin (Rose). The premise being as the song continues each part contributes until the end, where all 4 play in sync (hence... er... 'Synchronization').

There's the tiniest influence from Showtime (again). It was also my first attempt at some vague chiptuniness in a while, which may or may not have worked... You decide!

The breakbeat drum thing was also fun to do.

The idea behind this guy was something similar to the traditional idea of some HS songs being about movement (“Descend”, “Ascend”, “Upward Movement”), so in this case it’s 4 things moving, together as one. It was becoming reasonably clear that post-scratch, we’d be separating The beta kids up a bit, and ideally, once the dust settled, they would all meet up again - This track’s effectively the kids overcoming whatever barriers in their way to unite.

That was the original idea, anyway.

It was primarily Dave centered, because in my personal interpretation of Dave I’ve always seen him as a bit of Roadie - always working behind the scenes to help people out in a lateral manner - as opposed to facing shit head on. He’s also (and again this is personal interpretation) occasionally presented as the least capable of the 4. Part of it presumably stems from the contrast between Bro, who is so frighteningly capable it hurts, and living in that shadow while trying to emulate him but not quite reaching it is quite a defining trait of Dave.

That’s not to say he’s useless, I mean he’s died less than John, and he’s also not afraid to think laterally about problems and cheat (“Shenanigans”), but there’s been a few bits where you get the feeling he wishes he was a bit more of the hero his kin are.

Unite Synchronization is essentially a chance for a Strider to shine, to get the band back together and to prepare an ass kicking.

We start with a moment of contemplation, or at least an establishing shot of somewhere. Then bam - We’re moving. The main hook of this piece is the C - G# - D# - G# pattern, which is probably primarily influenced from Sonata Arctica’s “The Cage” (Though The Cage is a different key and pattern, but the progression is similar and just has a really nice epic feel).

At 0:29 we get the main theme of US played on piano - We’re representing John here. Throughout the song I pull in the associated kids instruments but make sure to constantly have the drums going - As if Dave’s grabbing each one individually and playing alongside them. The bass is supposed to be in a constant “running” kind of theme throughout the track. An unbelievably cliched dance-y snare drum fill leads us out into the beginning of the middle section.

The guitar’s actually the same guitar sample I used in just about everything these days, but gated - I haven’t done any gating for yonks and figured for the sort of dance-y nature of the track it’s probably not a bad choice.

At 1:09, we get the alternate-Showtime (The first few notes are the main melody of Showtime), then at 1:24 we’re back into US main melody. This is all done of Violin, which is of course Rose’s signature instrument. I also like the harmony on this one...

1:40’s where I try my hand at some breakbeats. These are actually quite difficult, and since the original slicing sounded a bit odd I also overlap a standard drum loop on top of it - The result is a ridiculous amount of percussion for a solo and a bit of funky panning for good measure.

The break is essential. Even Striders’ needs to pause for breath.

With the bass coming in we’re in Jade territory at 1:56. The bass solo here is kinda pulled out of anywhere, but has a kind of Sonic-the-Hedgehog feel to it.

2:20 we bring the percussion back in (A bar late, I love the delay there) and the violin’s brought more harmony with it. Now here the sensible thing to do to keep up the original metaphor is to have the Piano, Slap Bass AND violin playing (Geddit? At this point all the Kids are together and rocking out) but for some reason I went with a bunch of other voices. I guess there’s still bass.... And the choir could maybe be John singing along? I’m not sure... Potentially missed a good opportunity there... But I’m still happy with it.

And that’s US in a nutshell!

So despite it not being the exact context original thought of, the 2-part Flash actually manages to fit the original theme albeit with different kids. Plus it’s Strider centric, so that’s another plus, and once again I get to dramatically cut to silence while someone dies :D

But then everyone’s alive by the end of it, so that’s got to be a record turnaround!

It is remarkably disturbing how seriously on the ball Dirk is. Not only does he paradox up his own reincarnation with a bucket and his own head, he manages to resurrect two ladies and get them and himself time-warped to Jake.

This after his little presentation on Derse with Hearts’ head.