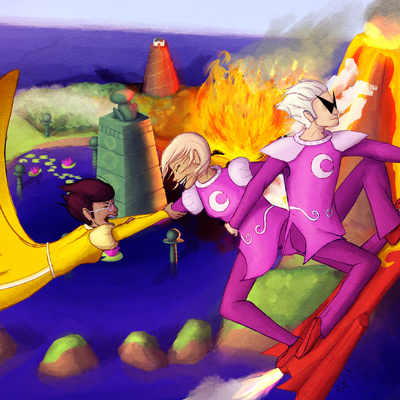 Similarly to several other songs on this album, this started as a rescore of [S] Jane: Enter for this collaborative project where people would come up with new music for all the flashes in Homestuck. The goal here was to make a song similar in style to Another Jungle (a very underappreciated song) without actually quoting it other than the way that song quotes Sburban Jungle. It was quite a challenge not borrowing anything else from other songs except for when I used a part of Oppa Toby Style towards the end, but this song was fun to make and I'm happy enough with the end result even if it's not as punchy as the original.

a fair number of songs didn't have commentary from their musicians and/or artists, so i asked a few people, mostly mspafans managers to write some filler commentary for those. they'll be prefaced by bold names.

(ive gone and updated the old LoFaM commentaries to follow the same style!)

This art is a lovely rendition of Fitzwibble of that bit in [S] Dirk: Unite where Dirk takes Roxy and Jane along for a ride. Unfortunately, due to her foolish boorishness, Jane does not appreciate the joy of flying through the air as a bird would in spring. It is a shame, that such an enlightening experience must go ignored.