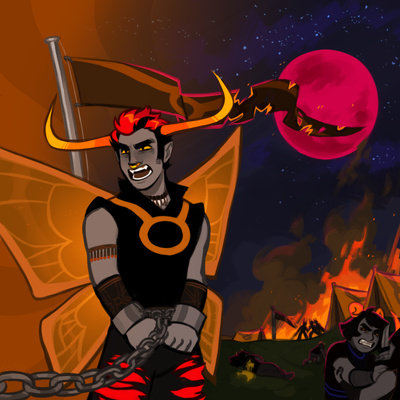 Since the Summoner's death isn't described in canon, I had a lot of free reign in this piece. I took the veiw that after the Summoner's rebellion was crushed, he was captured and executed by the Condesce. This piece chronciles his last speech (given bravely on his execution platform), his death, and the Condesce's attempt to suppress the rebellion. The low harp at the end is meant to signify how the story of the Summoner and his army survived in hushed stories.

I wanted to try to merge a few elements into this to capture ore of the song. I attempted to show the destruction of the rebellion through the flag by showing it as getting more worn down and ruined as it tapers off. To the left of the image I wanted to show the Summoner giving his speech while in chains, signifying his capture, and to the right I drew one of his camps being attacked and burned to the ground. I wanted it to be like the Condesce sending out armies to crush the camps and thus putting a stop to his rebellion.