Next: Land of Fans and Music 4

Next: Land of Fans and Music 4 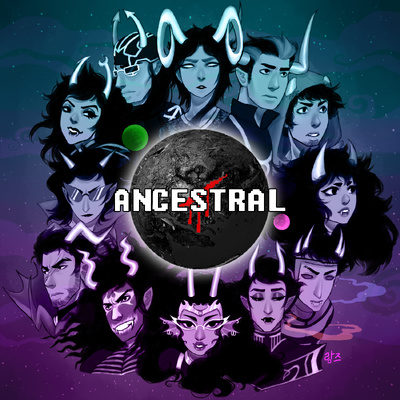 Track commentaries are authored by their respective fan musicians and fan artists. Track art is the property of the credited visual artists.

The Ancestral Album and related media are brought to you by Josefin B and the Ancestral Music Team, and are unofficial fan works based on Andrew Hussie's Homestuck. Homestuck is a property of Andrew Hussie and What Pumpkin.

I would like to thank Blackhole for having helped and guided me through this entire process. Couldn't have done it otherwise. Circlejourney for assembling the booklet and thus ensuring there would be one. Everyone who jumped in at a second's notice when I needed a track done. Everyone at the LoFaM team for having helped me and for managing a lot if not all the final workload. It's been fun.

As it is the cover of the album, I wanted to make it dramatic as much as to my ability. I wanted to put them in order of the zodiac at first but I realized that it didn't look as great, so I put the Signless and his associates as one and the other highbloods on the other side, and to show the Handmaid vs Condesce I made them top and bottom, as polar opposites. I felt like this was the best way to put them to show their interactions in the stories. The background was inspired by the actaul Homestuck album "Alternia" and the pixel-y title font is also because of the ancestor's role to prepare the descendants for the game.

To some extent, I consider Ancestral to be a little sister album to Beforus. We share many contributors and this project was largely inspired by Beforus. The reason we asked Rangzhe to make our cover was to tie it in. The very last track of Beforus, Motions of Infinity, ending with the ancestors being created, was drawn by her. Isn't it fitting how she begins this story after having ended the last? That, and her art is hella.