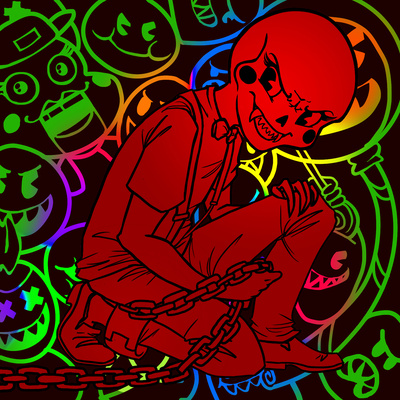 I floated the idea for a UU + uu album last year in about June as a concept record divided in half with equal and analogous parts Calliope and Caliborn. While we really wanted to jump in and get to making more Homestuck music following Volume 9, we decided to wait and discover more of the two characters until December when Radiation re-organized the effort. He proposed the Jekyll / Hyde alternating pace of the album culminating in “Eternity Served Cold” and had the group split into pairs, each musician working with a partner on a track with the same themes and motifs.

I worked with Erik, who sent me the at-the-time unfinished Calliope composition “Constant Confinement" for me to base my Caliborn track around. Erik’s track was so meditative, it was actually difficult to recognize the slow-paced woodwind melody over the course of the piece, which pulses onward without any strict meter. This melody had to be expanded upon a lot to match the pace of "Constant Conquest" - it actually flies by at breakneck pace in the first measure of the piece before settling into its groove.

Conquest in many ways resembles Ruins Rising, another electronic track based around one of Erik’s piano compositions. Like in my approach to “Ruins" I arranged the melody sparsely and created a very dense environment of drums and percussion sounds to convert Erik’s pulse into a groove. Same input, same solution, although this time I went much, much heavier than ever before. I had a handful of different drum kits going all at once, each with unique effects chains, to create more of an ensemble sound than a clean dance beat.

What really sealed in the atmosphere of this track was the huge slather of pads that adorned the track, most of which were created using analog equipment. I fed the signal from an old Radio Shack keyboard with basic midi patches through a pawn shop guitar pedal to create the many layers of sound that fill the background. Some of the most excellent sounds on the track (especially that snarling synth at 2:57) were created by hammering the mod knobs and wah-wah pedal while playing atonal pitches. The result is distorted synth excellence.