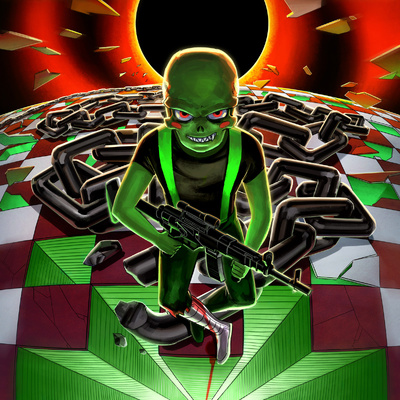 First off, a thanks to the folk who enjoyed EsC.

Secondly, the above question’s been asked by enough folk now that’s worth commenting on. Specifically, a) Will I release the original and b) Why is it different.

So let’s get a) out of the way: Most likely - I won’t release it right now though, as that’d diminish the album release. Somewhere down the line I’ll release the original version with the original mixing, and possibly the cut ending part (Which was cut because it sounded silly :p).

Getting the first bit out of the way, I’ve a long way to go with learning mastering properly. What sounds ok on Headphones A might sound too bass heavy on Headphones B, absolutely lightweight on Speakers C and generally terrible on earphones Q. With a bit of effort, understand and the right equipment or software the process can be considerably better (I’m using various Dynamic Range monitors to check loudness, for example). I’m still fairly naff at it.

Now, Eternity’s one of the more complicated tracks I’ve done - It’s got quite a few opposing voices: a synth orchestra, synth and heavy percussion, rhythm and lead guitar voices, pianos, wooden and metal toned percussion, timpanies, creepy sound effects, various choirs with various articulations and so on. Getting all these noises to sound halfway decent on top of each other might’ve been a bit beyond my current skill.

When I passed the first version to Rad, he noted it was a bit quiet compared to other tracks. A few variations later (Some bass reduction because a lot of my tracks are a bit bass heavy, I blame my default headphones which have very little bass), then it was a bit anemic. Brought the bass back, tried to bring in some of the voices that were being drowned out (This is the biggest problem people have with the newer version - Some of the strings have been reduced in favour of other voices, notably in the Revelawesome section). Long story short, I didn’t have a decent setup that lets me make any mastering decisions with much confidence.

There’s also a few notable mistakes in EsC in general - Firstly, there’s simply too much strings. In some sections, there’s a high string melody, with staccato strings, more strings below that, and a cello/double bass strings bit. And a solo violin on top of that. It’s simply too much string section fighting over control of what’s going on - This was the main reason for trying to bring the french horns and oboe back into the fold. Additionally, I’m not convinced I’m using panning to its best, resulting in a very squashed mix that’s very central and doesn’t sound “spacial”, which a bit orchestral track really should.

Mastering EsC highlights that there’s large gaps in my skill for music production that I need to brush up on. This is good - It’s always good to have targets for self improvement. I’ll say right now that both versions are still considerably better than Rex Duodecim Angelus :p And essentially it’s the same deal - A synth-orchestral romp through a Homestuck medley meant to sound mean and imposing and threatening, so I won’t say I’m not improving :D.

TL:DR: Yes the old version will be released at a later date. It sounds different because I’m wishy-washy at mastering. (I’m not actually sure if I’m using that term right, I’m basing it off Peanuts)

I’ve been getting a lot of questions about this guy, so here goes:

The track in general

If you’ve been paying attention to this blog, I already hinted at the development of ES. It’s kind of a “Sequel” to Rex Duodecim Angelus in that it’s a gradual Medley of HS tracks arranged in some kind of sinister Boss Theme.

The track itself is split into 3 “Acts”. Act I acts as a kind of intro and goes from 0:00 to around 2:30 (As the Revelawesome section begins). Act 2 is the conflict, and ends just after “ the party is defeated” and the music turns a bit more sinister around 4:40. Act 3 is distinctly missing from the flash, but deals with the heroes comeback and eventual final conflict and resolution. The Flash ends just hope is beginning to peek through.

The obvious inspiration and basis for this track is Toby Fox’s “English” and it’s meant to be a track for LE ‘imself. As the act structure implied, it was designed for a battle with LE vs The Good Guys, but ultimately works as a “LE is doing something incredibly nasty and you guys better stay away!”

The track in more detail

I tried to be a bit more cinematic in my orchestral arrangement here. It’s far from perfect, but it’s better than previous attempts. Gotta keep pushin’ yourself I guess.

Stuff you should be able to hear:

Stuff you didn’t hear because the track ends before it gets going:

So why make another Medley fest? Quite a lot of the HS themes blend really nicely together, and we can associate a lot of events and memories with past flashes (Revelawesome was used as a kind of gag, but here’s it more sinister). I do like a good Medley, and judging from the reaction of Descend, RDA and the latest Solo Album, you guys do too!

The track was made in FL Studio. It mostly uses SoundsOnline EWQL VST libraries, namely:

And a few soundfonts.

When is it available?

Good question! I suspect you’ll be waiting for Volume 10 to show up, which'll materialize after the solo albums and once we’ve got enough Cherubim goodness for you.

“Eternity” should be obvious. He’s a time travelling demon after all. "Shylock" is a bit more confusing and that leads us on to…

A bit of controversy with the name

“Shylock”, as many of you know, is a character from “The Merchant of Venice”. Specifically, a rather antagonistic Jewish Moneylender. You can read all about the antisemitism debate on the WIKI page but long story short, the character of Shylock has quite a bit of controversy surrounding the portrayal of the Jewish.

Now, from the name “Shylock” it’s also a slang term for “Loan Shark” - One who loans money yet charges extraordinary amounts of interest and threatens those who cannot pay the return. It was used in 20th century gangster/Mafia slang, and that’s where I pulled it from as a nice fit to Lord English. Therefore “Eternity’s Shylock” - One who gives time, only to take it back with interest. It’s a bit of a stretch, but in the end it sounded like a nice name - Mildly sinister, yet grand.

Now, my use of the term “Shylock” in this context is that of a Loan-shark. There’s been plenty of portrayals of this profession, particularly in crime dramas where one character gets in deep with one and they send round “The boys” to break some fingers etc. The name “Shylock” in this manner refers to the profession and behavior rather than the character or his religious beliefs, but I can fully believe why some people would look at the name “Shylock” with disgust, given the controversy surrounding him.

This was my bad in lack of research, and I apologize. There was certainly no insult meant if it was received.

However, it should be clear to anyone that Lord English, a time travelling threat to all existence, is not in any way implicated to be Jewish. No more so than the implication that he’s from England and has a seat in the House of Lords because of his name. He’s a green, skeletal Mafia pimp demon who flies through time in a crazy sarcophagus and vomits rainbow laz0rs.

I may be [mis]understanding the original controversy surrounding the issue, but from what I read it implied that Shylock the character and Lord English were one and the same, and that Homestuck was presenting a parallel to tMoV. The link is… Well I may not be the finest literary analyst in the world, but I don’t buy it in the slightest. And even if it was a genuinely well thought out analysis, I’d be delighted to be told exactly where in Homestuck it is implied that Lord English identifies himself as Jewish by his words or actions. Or at which point Shylock vomits lasers all over the dream ghost of Antonio.

See, it sounds absurd. Fan-speculation is a large part of the Homestuck community, but sometimes it can get a bit icky when it dives into issues of race and creed. You’re thinking about it too much, it’s a webcomic about some crazy stuff. Just chill.