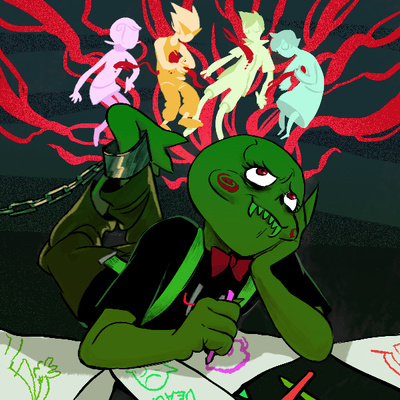 So with Cherubim, we tried something a little different to reflect the duality of the character/s in question. The album would be split into an even number of tracks grouped in pairs, and then finish off with Eternity Served Cold, to represent Caliborn’s dominance and unchaining. The pairs would represent a similar track done in two distinct styles for Calliope and Caliborn - Calliopes tracks would be considerably mellow, light, friendly, while Caliborn’s versions would be chaotic and angry.

Carne Vale mirrors RJ’s “Stellarum Salve" though only vaguely - I probably could’ve done a better job, but hopefully there’s enough recognizable lapses into SS that I treat as Calliope’s personality sorta coming back into the fray. The noticable sections are 0:00 and 1:58. Outside of that, anything pretty much went - The original ideas thrown about were a kind of crazy, OTT DnB. I ended up combining that with quite a bit of angry metal guitar, and a few spoonfuls of English (And Eternity, just for a bit of foreshadowing).

Originally I was looking into the Saw theme for inspiration, since there’s quite a lot of decent connections to be had there (Not least because of Caliborn’s escape sequence and the whole Lil’ Cal thing) - in the end I didn’t really use much of this, which is a shame because it’d probably work quite well…

The name for this guy actually has more backstory than most. The working title was “Caliburninate”. Afterwards I thought “uNCHAINED” might make a nice name, since the progression of the song made it seem an almost alternative version of Caliborn’s freedom/leg-sawing. adventure. Trouble was, Eternity Served Cold already provided the background to that, and it’d make more sense to rename EsC to “uNCHAINED” than this one (as pointed out by Toby). So that idea was dropped and still no name.

(Also, while I considered renaming EsC to ‘uNCHAINED’, I figured that guy’d been renamed enough and people were already referring to it via the ‘Eternity’ name, so I figured just leave it).

Finally I looked to the whole ICP/Juggalo angle. Latched on to the name “Carnival”, but that on its own was a bit flat, so went looking into the etymology of the word. Dug up “Carne Vale" (lit. ‘Farewell Meat’) and that was that.

It bizarrely managed to be a sort of weird mirror of “Stellarum Salve”, and be almost appropriate to the whole leg-slicing shenanighens.

Now, there was quite a lot of DmC being played while I was making this, so a lot of of inspiration came from both the new Devil May Cry and the original ones.

We start off with a minor-ised version of a sequence from Stellarum Salve, before bursting into the rising power-chord section. This is you’re typical “transformation” section where Caliborn’s personality is beginning to take over. Of note for this song is the usage of Shreddage, which I’ve been fiddling about with after Toby posted about it a while back. My setup for using it isn’t brilliant, but the Amp sim it comes with is decent enough and the recorded strings and general setup (i.e. easy support for double tracking and the like) are probably better than anything I could do with a real guitar.

At 0:45 we bring in a direct reference to Eternity/English. (The melody is English, the music box in the background is referencing the beginning of Eternity). Can’t quiet remember what I was doing for the synthy-bass in the background, but I do remember it was fairly distorted. The laughing here I’ll talk about a bit later...

1:10, and Shreddage is paying for itself with a meaty bit of rhythm guitar. Probably could’ve done a bit more variation around these sections, but it was doing a good enough job.

1:57 gives us the second Stellarum Salve reference, sort’ve mashed two bits together. Here we have a brief reprieve from the chaos as Calliope’s personality resurfaces. Then however, we get to the noisiest bit of the whole song.

2:27 and we get ready to go into full rave mode. Once the beat gets going, I decided to try a more complex riff for shreddage, a mix of power chords and lead. The synth bass also gets a bit more to do, adding a bit of panning and the then pitching it up to play a crazy arpeggiation. This bit was basically just “do something crazy”. Originally I had some laughter here too, but took it out since it was being drowned out by everything else.

3:02 and we return to a bit of sanity. The guitar solo here is again provided by shreddage and sequenced - It’s actually fairly simplistic, but adding a few articulations helps fool it into sounding a bit more believable.

3:26 and we bring our old friend Fruity Slicer back into the fray. He’s simply slicing the beat that was used throughout the song previously, while the rest of the song calms back down to another reference to English. Once that’s done, we bookend the whole thing with another reference to Stellarum Salve - Caliborn’s off back to sleep and we’re returning to Calliope again.

Now, a few other interesting things about this track (That a few people have already spotted) - firstly, it actually uses quite a few samples that come with FL Studio. Namely the percussion and the laughter. The percussion was pretty much the only example I had for the kind of drumline I was after, so it was fine.

The laughter was an interesting example - It’s from one of those collections of samples of voice that are usually terrible and added to 90s dance tracks (Shouting something random if its a male voice, like “CHECK THIS BASS!!” or “YEAH!” and moaning something incoherent if it’s female like “Oooahhhawoooahhayeah!”. Pitched up it sounded creepy enough when layered. It’s a bit cliched, but it works.