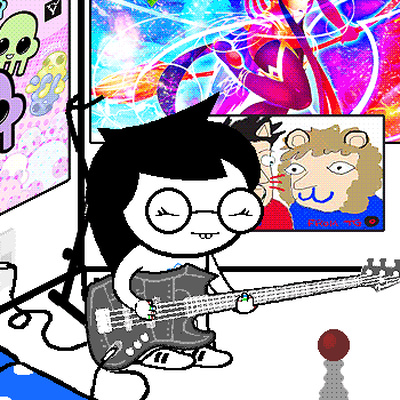 This is part of the Bolin Incident. If you don’t know what happened, up until half-way through Act 4 a guy called Bill Bolin was on the time, one of the original members. He was a great musician, that much can’t be denied; he wrote a lot of tracks that appeared in early act 3; Jade’s bass solo, the remix of it, the last part of the Dave and Bro battle… some others I forget. During that flash with Dave and Rose on Derse the original music was five Bolin tracks, ones he wasn’t all that happy with. He flipped out and did a lot of things that ended up with him dropped from the team, and his music replaced.

I called replacing Jade’s bass solo (I was enthusiastic about getting something of mine into the comic). We figured there’d probably be an existing piece of music used for the remix on Prospit so there were a couple of different versions remixing different tracks until Something Really Excellent was locked in.

We were on a strict timetable at the time, so I didn’t get the chance to find a really good bass voice or find a good rhythm. That was much improved for the actual release in Volumes 1-4.