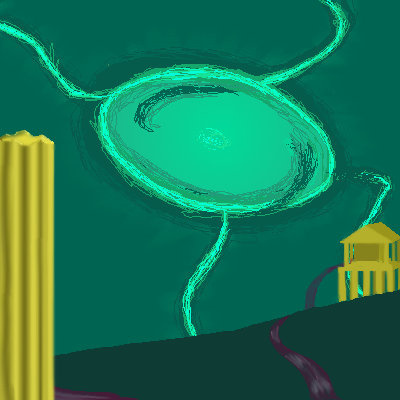 Tracks that Thought and Flow references:

This track is part of a remix project that I began after a major computer failure that cost me most of my audio files and music project. The overall objective was to remix the themes from the levels of Sonic 3 & Knuckles into music for each troll, a project that is still slowly ongoing.

This particular theme is for Terezi, based on the Hydrocity Zone music. I went for a jazzy remix, largely because I felt it tied in well with her prosecutioner thing. I think it's an interesting look at how my abilities have developed since I first wrote the piece - I had to make adjustments just to be satisfied putting it on this album.

As it happens, drawing giant sky neurons is incredibly fun. Ancient runined temples, not so much fun and also incredibly difficult to shade right, but there you go. I am ashamed I did not manage to work in any Sonic the Hedgehog references, though.