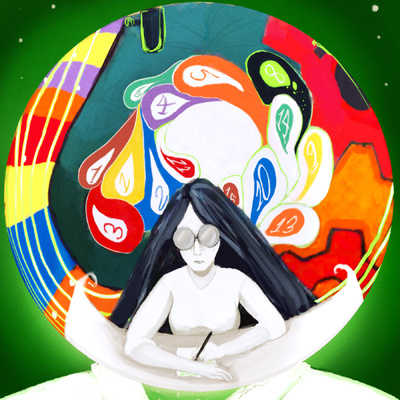 This piece has been in the works for a LONG time. I started it in March of 2017, and though most of the compositional work was complete by July of that year, I didn't finish polishing everything up until late April 2018, after many months of procrastination and tweaking. The idea of the track is simple, it's Jake's Grandmother, Jade English, writing a song for her signature eclectic bass sometime in the 80's, which you probably already knew from the title. Anyway, I wanted to make a song that you could supposedly 'play' on the eclectic bass, which meant I had to figure out what exactly the components of such an instrument were (see the accompanying diagram). I chose the iconic Yamaha DX7 (used in tons of 80's pop) to be the keyboards of the instrument as it could make the sounds I wanted, it was from around the right time, and I had an emulation (Digital Suburban's "Dexed") on hand. Other instruments used in the song were Karfoyer Audio's "Pastabass" and "Swagbass" for the bass guitars themselves, as well as Full Bucket Music's "Ragnarök" (used to flesh out some bass frequencies at the song's peak), and some built-in GarageBand instruments (drums) and effects.

Compositionally, I started out with the ostinato that closes Rhapsody in Green (Clark Powell) from the Felt album, but played in reverse, adding in an FM pad (the aforementioned DX7) and Skaianet by Mark Hadley on the other bass guitar. The introduction section transitions into variations on Verdancy (Bassline) by Kalibration, and closes the track's first half with a medley of various Jade-related songs. The second half is an original thing (though the beginning is a variation on Afraid of the Darko by RJ! Lake) that I had build in complexity and intensity before dropping off to end the piece. Reference-wise, I tried to keep things centered roughly on Jade, as well as some other skaianet/felt sort of stuff that I thought fit the Alpha world and Jade's place in it, but I did end up throwing in a couple memetic references, see if you can find them both!

Grandma Harley often wrote her grandson about the tyranny of Lord English, obviously not able to hide everything from the enemy.