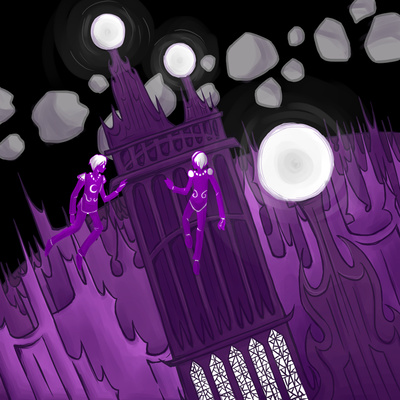 Tracks that reference The Obsidian Towers:

I started to shift styles for this one a bit. I wanted something that was more majestic sounding, but still as dark as Darkened Streets. Ultimately, I decided to feature the choir section more in the intro. It actually was probably the first synth I put in this song. Everything basically followed.

I had a bit more fun with the bassline in this song, though it’s not particularly complex. The focus definitely on the time shifting beats, a la Dave. Hell, Dave is the main reason I decided to use Gross Beat heavily. I wonder if Dave feels like a Time Lord as the Knight of Time?

The Obsidian Towers was actually one of the last songs I finished composing for the album, because I got totally stuck on it without having the string section in there.

Anyway, I think this song definitely describes the Towers well enough, though, I feel like I could have gone for something a bit more powerful in sound. Something more looming, more... ominous. Oh well. Hindsight is 20/20, yeah? To be fair, The Golden Towers suffers from this issue as well, so it was probably also a composition problem. Woosp!

Nonetheless, the string section in this song, especially right at the end, is one of the cooler sounding harmonies I’ve thrown together.

I really have always loved the architecture Andrew picked for the moons, though personally I feel it fits Derse far better than Prospit.