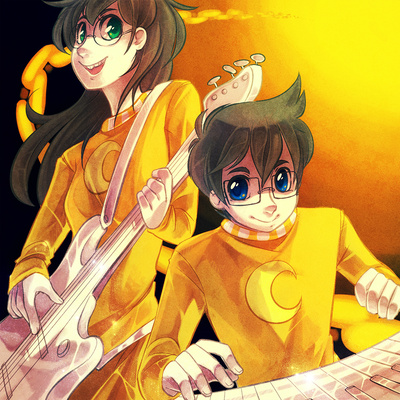 I really don’t know what I was thinking on this one. It was rushed, and it’s, sadly, my least favorite work I’ve ever done. I had some interesting ideas, going with a bit of a swing flavor to it, but frankly the song sounds like I was going through ADD.

It probably doesn’t help that I basically [wrote] a small, but significant, part of the song and set it aside for a few months before adding in the piano and bass parts and finishing it.

And by rushed I mean I was actually adding to this song days before the album came out. I wouldn’t recommend anyone doing that ever.

Still, people seem to like the song, and to be fair, there’s a few really neat parts in it. It’s just, well, weak overall. I’ve done a lot better, and this song’s ‘failure,’ so to speak, taught me a lot of valuable lessons.

Sorry if you were expecting something more positive!

This song is freaking weird.

Now why do I say that? Well, it doesn’t really know what it wants to be. A 6/8 piece somewhat reminiscent of something from the Legend of Zelda? A 4/4 piece? A swung piece? It’s... well it’s all of those.

Prospit Dreamers is without a doubt the most ambitious song I wrote for Prospit & Derse. I did a lot of really awkward things that worked out really well, but I had absolutely no idea why any of it worked. And so I ended up really hating the song because I thought it was too random!

Come a year later and I now I understand my composing style better, so when I listen to this I find it to be a pretty dang fascinating piece. A lot of individual parts making a very interesting greater whole.

If you think about the early part, it sounds like the Prospitians had created this really mellow 6/8 piece, but then John and Jade show up and mix it up with their (my headcanon) love of swing music.

I’m especially pleased with how I managed to fit Frost and Doctor together into this song, along with a little bit of Penumbra Phantasm, and still make the song stand on its own. It’s a lot cooler sounding than what I did in Derse Dreamers, honestly!

My personal favorite part is the time signature switch when the clarinets come in and play an arrangement of that familiar motif from Penumbra Phantasm, and then the strong french horns playing the same line they played in Frost behind the trumpets playing Doctor’s melody.

It’s really hilarious how I used to not appreciate this song, but now I do. I actually enjoy it more than most of the album, and I’m really glad that my opinion changed, and I am also really glad I asked Zoey to do the art for this song, because her art is amazing, and her interpretation of John and Jade is the best. THE BEST. Speaking of, she informed me to tell you all the following: