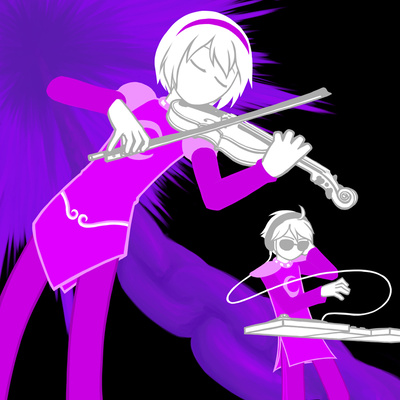 Well, this is the most popular song from Prospit & Derse. Not surprised it eventually would show up. :>

This song, along with Core of Darkness, captures the very core idea I had in mind for the Prospit & Derse album: writing music about the settings, but showing that the mere existence of the kids on those moons influences the music as well.

Derse Dreamers was the first to actually reach that goal, and was actually the first song to be fully completed on the entire album.

Of course, this song being retroactively tossed into the Shut Up and Jam page helped with its popularity quite a bit.

Retroactively gaining an additional featured song... from a page that existed before my first real feature. How’s that for weird time shit?

The fan favorite. Without a freaking doubt. This one compares to Frost in popularity, and I’m willing to bet is probably even more popular thanks to horizon’s vocal cover.

What’s that? You hear Iron Man in it? Yeah, so do I. Oops. That string section is kind of hilariously similar. It’s a huge coincidence, though, because I really don’t listen to Black Sabbath whatsoever.

When I started this song, I knew I wanted two things: Rose playing violin, and Dave being a bad-ass with time-shifted beats. I ended up making the opening motif and let it repeat for most of the song. People seemed to really like the strong focus on Rose and Dave, but I think even more so people enjoyed the callbacks to their respective Medium world themes (Endless Climb and Atomyk Ebonpyre, respectively).

"I recall the idea was to draw Rose and Dave jamming on Derse, but the piece itself made me think of space, so they ended up jamming in the space between Derse and its moon instead. Rose’s bowhand unfortunately reflects my own terrible grip when playing violin.

Also, I laughed when it was discovered that Derse Dreamers made it into [S] Rose and Dave: Shut up and jam just prior to the album’s release. Fandom, you never cease to amaze me."

I agree with her there. I was very amused when people noticed the change to that page even before I had the chance to mention it to anyone. Crazy fandom ninjas!

Yeah, that’s pretty much all there is to this song. It was remarkably straightforward. I didn’t do anything particularly surprising for myself on this one. I knew exactly what I wanted to do, and I did it.

More importantly, however, I’m thrilled this song is enjoyed by so many people, and I’ve been blown away how people have have been using this song in their own derivative works. It’s just really heartwarming as an artist to see my work out there having a life of its own.