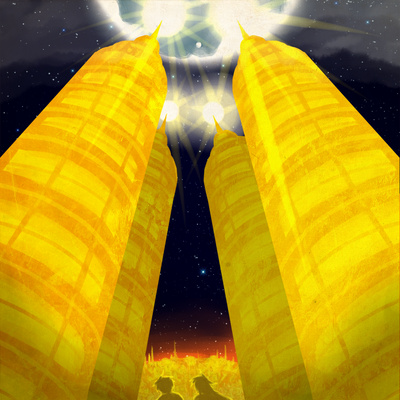 Tracks that The Golden Towers references:

Tracks that reference The Golden Towers:

That probably frightens you a little, doesn’t it? Yeah. Well, putting it simply this song tried too hard to be The Obsidian Towers. I really wanted to do that parallel idea with this song and its Derse counterpart more than any of the others, but I ended up trying too hard to pull off that effect. And this song suffered greatly for it.

To be fair, it’s got a pretty cool twist on everything compared to Obsidian Towers, but the biggest problem with this song is that I didn’t try to let it be itself. You have no idea how badly I want to redo this song. There’s so much potential behind this song that, at the time, I really just didn’t understand. Of course, I’ve learned a remarkable amount since then, and one day, hopefully soon, I will rewrite this song.

Haha, I sound like I’m really tearing into my work here, don’t I? Well, it used to be Prospit Dreamers that I didn’t like, but more on that a little later.

As I mentioned with The Obsidian Towers, both songs suffer from being really boring compositions. While Obsidian managed to get away with it because of my production skill, this song couldn’t hide behind ill beats and a deliciously dark atmosphere. So, the very inexperienced composer in me tried his best to piece together a song based on The Obsidian Towers.

Is it horrible? Eh, I’ll leave that judgment up to you. I know there are fans out there who really dig this song. My opinion is that it’s my weakest song related to Homestuck, but really, it’s not the worst thing I’ve ever done.

I’m quite pleased with what Pride did for the art, though. It worked out really well for the song.

As an additional note, it’s been pointed out to me by this fan that this song sounds like it has Mark Hadley’s Problem Sleuth theme in it, at least in part. It’s a coincidence in the exact same reason that Frost gets the same comment: slow melodies, probably the same key. Really nothing else to it. I’ve listened to Hadley’s PS theme probably twice ever. Oops. Said fan also wondered if I jokingly thought that gentlemen of Team Sleuth are Prospit’s agents much like our chums in the Midnight Crew are Derse’s. I didn’t, but that’s an awesome comparison and now I’m all for it.