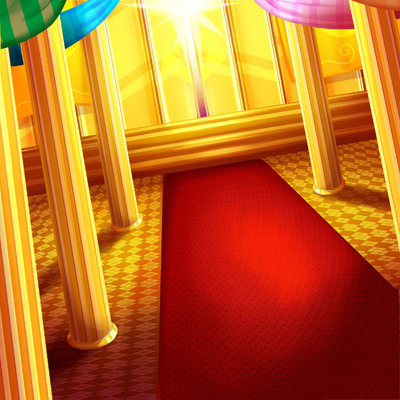 Hm, I haven’t thought much about Prospit & Derse since its release, actually, but, here goes.

As you can probably tell, the two halves of the album have some parallels, especially in the first two songs: e.g., Hallowed Halls is to Darkened Streets as Golden Towers is to Obsidian Towers. I originally wrote Darkened Streets, but I really wanted to take the melody and progression used in it and apply it to a brassy fanfare. That’s ultimately what Hallowed Halls came to be. Honestly, if it wasn’t for Mark helping me name the song, I probably wouldn’t’ve had the right image in my head for the new arrangement.

And Nick Smalley helped me out with those french horns, making them sound halfway decent.

Not really much else other than this song and Core of Darkness are without a doubt the best two on the album.

The opener for Prospit & Derse, at least, in the album’s final lineup. This was actually track #5 for the longest period of time, but I realized just before release that Prospit had a stronger opening track and Derse had a stronger closing track.

This was a really fun song to create, and definitely helped set the example of how I wanted to approach Prospit for awhile. Hilariously, if you listen to how the album’s set up, there’s actually 4 sets of songs. Hallowed Halls and The Golden Towers have a lot of similar instruments, and are both designed as parallels to Darkened Streets and The Obsidian Towers, which also have a similar set of instruments. I ended up veering off into totally unique territory for each half’s Dreamers, and ended up continuing in those new directions for the 4th tracks.

A big thanks to Nick and Mark for helping me get this particular track started. Mark gave me some good ideas (as well as naming this song) for how to put together some of the melodic lines. Nick came along and pointed out how I should use the French Horns. So this track is almost completely why the two of them have special thanks credits on this album.

In retrospect, the song feels like it’s a bit empty. For being what’s supposed to be the Royal Palace of Prospit, the impact just isn’t there, neither melodically nor atmospherically. It’s not a bad song, but it just barely misses the mark that it deserved to hit.

However, I absolutely adored the art Bea did for this piece, and, well, .. hey wait the art up there is different than it used to be! Yup. Bea decided to update the art for Hallowed Halls, and she did and even better job than before. Oh, and here’s the fun part on this: I had no idea she actually was doing this until a few days ago, and she forgot that the anniversary was yesterday! Anyway, here’s what she had to say:

"contributing to homestuck, a webcomic thats given me so many opportunities, friends and good memories is a great honor, especially to be involved in an album as conceptually compelling and well executed as the prospit and derse album. i thank solatrus for the opportunity to be a part of his creation and everyone who helped me give back to something that has influenced my life immensely."

Thanks for helping me out, Bea. And keep up the good work.

I have to say I’m pleased overall with this song, but, like any artist, it’s difficult to look back at my works. They never seem completed. Especially the Prospit half for me.