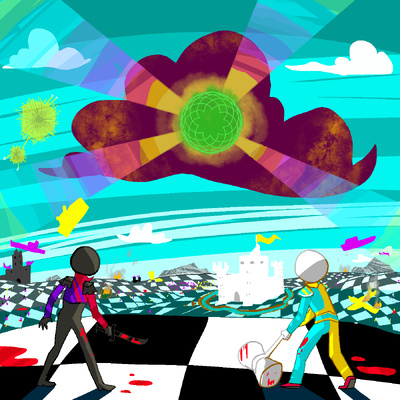 On the horizon, the waves
Impassible it claimed
I trek for a bridge
No matter how rough the shore
Lies ahead of me
I'll know I'll find my way

The fertile fields I have roamed
One journey soon to end
I have what I need
Within the stalks, my cocoon
The nature nurtures me
Yet deep within, I know...

The opening chords of this song were originally part of a scrapped attempt on Singularity, a song from the previous album on the bandcamp, Cosmic Caretakers. That was the penultimate song on that album, and this is the second on this album. So in a way, they're like weird bookends. More to the point though, this song ended up as an unintentional but fortuitous continuation to the "voyage" brought up in Home, both physical and metaphysical. In literal terms the lyrics are about the crossing of humans along the Bering Strait, but another interpretation is that they're a reflection of a process all humans go through: the pursuit of a purpose, the satisfaction of completing a goal, and the perennial urge to find new things to do, new things to learn, to experience, to travel. It's a fundamental feeling, true from the dawn of you, to your last sail on the pumpkin tide.

Naturally when everyone else is going for wild, creative concepts, I fall back on making it Homestuck... when I heard Cait's song it made me think of the Battlefield, and when I read the lyrics, I thought, what better thing to depict than the moment Mobius Trip and Hadron Kaleido look into the clouds for the first time and witness the secrets of the universe?