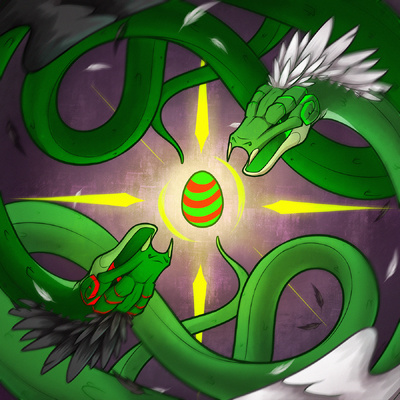 Then all the planets fell to dust

This track originates from an idea I had in 2014 to make a track about Calliope and Caliborn's parents. Five years later, it's finally done, stitched together from the composition and/or actual audio clips of like 4 FLPs (I went through about 6, all in all). Funnily enough, the scribbles I had for this song in 2014 then are completely different composition-wise from what ended up being made, but the narrative loosely remains in this track: the cherubs' mother drifts through space, searching for her mate. She spots him, taking off at full speed, following him as he leaves a trail of destruction across the universe. Their eventual meeting is tense, cold. Saying nothing, they transform into unfathomable astral serpents, and battle to create the most innocent muse and most shitheaded gremlin to ever exist.

The game of choice for cherubs seems to be chess, or at least, some neon-green candy-red shitty-twist variant of the game, but I'm getting real playing card motifs here. Two identical, serpentine warriors, millions and millions of miles long, locked in a symmetrical whirlwind of a strife. Reminds me of the art to Noirscape back on Volume 9, though that's a more literal example. The spiraling, iconic egg in the middle, shining like a light in the darkness, is a very clear reminder of what these two are fighting for: the right to force their opponent to give birth to literally the worst entity in all of existence. But I suppose it didn't matter who won or who lost. After all, he was already there.