Next: Moons of Theseus

Next: Moons of Theseus 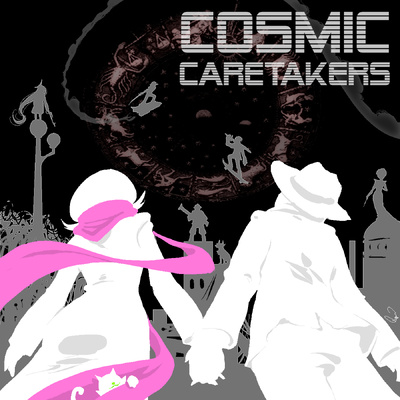 With cover art by Elanor Pam

and cover art commentary by Ephemerald:

We see dimly in the present what has guard and what has none,
Slow of faith how weak the curtains turn the moon and turn the sun,
But the soul is still a caretaker; amid the Furthest Ring,
List the fabled cosmic whispers that the horrorterrors sing:
'They are in the consellations of the pondsquatter's offspring.'
-James Russel Lowell, Second Son of Skaia

With final thanks to the Homestuck Music Team, Andrew Hussie, What Pumpkin, and the loyal, enduring fan base that makes this all possible.

The concept for this album had its origins more than two years ago, and its basic blueprint was drawn up by me as a follow-up to Beforus. Back then it was known as "Rubric of the Guardians", and while that was later changed, and due to management upheavals I wasn't personally involved with its development as "Cosmic Caretakers", I am excited for what the project has become and what these fantastic musicians have in store for us. A comprehensive Guardian album was an idea straight out of my original list of fan-album concepts circa 2015 that spawned Beforus, and now finally the dream of having themes for all of them is realized. Vava la Guardians! (V-l-G, perhaps? Or perhaps not. :P)

This album dedicated to the classic fanmusic album reality of progress stalling for months, followed by the completion of half the administrative work in the final three days before release. Seriously, I wrote this afterword 1 hour before the album stream. But if you're reading this, I hope you've enjoyed every last minute of it, because I know I sure did. All our work and unwork was not in vain.

Putting together the booklet for this album made me realize just how ambitious the project was. We have said goodbye to a few old faces over the long production time of the album, and some have questioned the team's motivation. However, I think it is a testament to the enduring strength of the team that we have been able to stick with this project, despite delays, until its release. I want to thank everyone who stuck by it, even when it would have been easy to write it off. It's been a long haul, but we've learned a lot about how to avoid similar delays in the future, and the team is facing the next project with renewed enthusiasm.

MSPA READER.
IF YOU ARE READING THIS, YOU ARE STRONG ENOUGH TO LAST ONE YEAR WITHOUT UMSPAF CONTENT.
YOU ARE NOW GROWN UP. IN SOME WAYS, YOU HAVE MOVED ON. BUT YOU HAVE ALSO LEARNED THAT GROWING UP DOES NOT ALWAYS MEAN SAYING GOODBYE TO THE THINGS YOU ENJOY.
I AM SO, SO PROUD OF YOU.

(per LoFaM 4 standard, ive highlighted commentary from people besides the original musicians or cover artists in bold!)