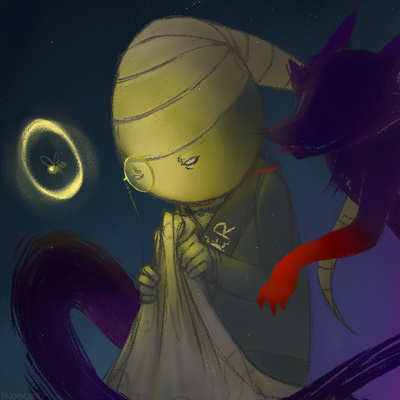 What a Daring Dream

What a daring dream, to combine the finest qualities of humanity with the elegance and nobility of the animal kingdom. How you wish you could know their world. To hear one night those muted pawpads traipse up your stairs. A low but friendly growl unsettles your slumber, and as the sopor seeps from your eyes they detect a sharp pair of ears cutting moonlight. A mysterious wolven tongue invites. Wouldn't these ears suit you? Would not this proud long snout assist you in the hunt?

What a daring dream...

The Wanderers is my favorite Homestuck album. Its focused premise, interesting takes on a theme, and general aesthetic all appeal to me. Not to mention the fact that it contains some of the best songs in the Homestuck discography. This song is not one of those.

I don’t mean to sell myself short, but What a Daring Dream is hard to appreciate on its own as music, and this was intentional. As a matter of fact, I wrote it to underscore WV’s dream sequence, which is one of my favorite parts of Homestuck. And even then, my approach wasn’t as programmatic as Malcolm’s, as he had the same idea with his track, Nightmare. Funny enough, we even ended up giving our pieces the same title, but he was generous enough to change his so that I could keep mine. Of course, because of this the two songs compliment each other very well, and make for a great double-closer to the album.

I composed What a Daring Dream long before we officially started production on The Wanderers. I actually made the first version of it very shortly after that update came out, it being one of those quick flashes of inspiration. In terms of musical influence, there are a few musical cues from Neon Genesis Evangelion that sounded like the direction I wanted to take. All the ones I listened to had this sort of “stuck in your own head” sort of approach to them, which of course is very suited to their subject matter, and that was the reason I thought this sort of music would be perfect for my piece.

I wanted the music to be very hazy and meditative, very much like a dream (naturally). Unclear sounds fading in and out, soft messages you’re not quite sure you’re hearing. The use of Morse code was an obvious choice, though I did not have the patience to translate every single line of code in that sequence. I just used the same sample repeatedly, altered it a bit, and panned the two versions of it to each side of the mix. I did, however, think it would be worth my time to whisper the English translation of the Morse code, so throughout the piece you hear my voice narrating ever so slightly in the background, even up to Vriska’s dialogue.

The instrumentation was a lucky coincidence since I modeled parts of it off the Evangelion score, and those happened to fit the very broad “Eastern music” theme we were going for for the most part. So the piece turned out to be a great candidate for the album and I worked on it a lot more before submitting it to be on there. Overall it was one of the most fun songs I’ve had the pleasure of making for Homestuck, and the fact that it spooked some people is an added bonus.

Speaking of bonuses, Noot did the art we used for this track. It was one of a few pieces of track art that weren’t commissioned. I happened to be looking around for artists and saw this, and I already knew it was perfect.