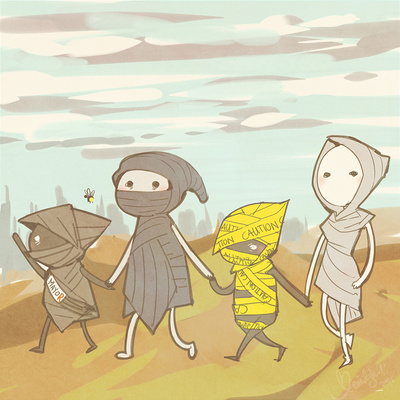 My most recent contribution to Homestuck’s music, and another of my favourites. This piece is actually pretty old, going back to before Volume 5, where it was much simpler (playing out more like a round) and with poorer sound quality in general. Like most of my music it was inspired by a similar piece from somewhere else - in this case, the original Bionicle flash adventure game that used to be on the Lego website way back. If you’ve played it, you might notice the similarity, at least as far as instrumentation goes. It had been many years since I’d last even seen the game, long after it fell off the site, so I couldn’t recognise what I liked about the piece and so the imitation I’d made was pretty poor!

Fast forward a year or two. Some discussion with internet friends had led me to find that old flash game again, and I heard my old favourite tune in all its glory (significantly less glorious than I remembered; nostalgia does that to you). Still, it showed me the main place I was going wrong, which was that I’d neglected harmony. All of the three or four lines of music that piece had were monophonic, making a really drab sound, while what I needed where chords. A stupid mistake? Sure, it was, but then, I wasn’t that good a musician when I first wrote the piece. I started over, applying all the experience I’d got both from writing music and simply listening to it with a critical ear to get my main contribution to the Wanderers album, and something I could be proud of.