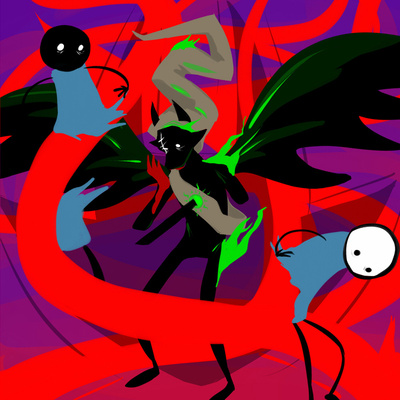 This one was a bit weird, and went through several revisions trying to figure out what to do. It's loosely designed to be a bit of music for WV's dream in which he effectively turns into Bec Noir and starts killing everything before Vriska turns up disguised as Serenity and makes the whole sequence even weirder.

Firstly, the concept - It starts of quite dreamlike, then as we get to 1:40 the transformation starts, then there's some more preamble up to around 2:45 onewards, which is the "Red Miles" section where everything starts to go haywire. In betwixt there's lots of creepy choirs, weird noises and distorted barking all set to a kind of pseudo Egyptian theme (One working title was 'Anubis')

Hidden around 0:25 onwards is a kind of very subtle reference to Black and an even subtler reference to RDA. After that it's mostly original.

There are various samples hidden around the place, like wolf barks and jackal howling. Also all sorts of bizarre human laughter/screaming/conversation that's been reversed and distorted. Then we get to 2:45 and I attempt to kick it into a kind of bizarre Trailer-music affair with a ridiculous amount of percussion and a lot of staccato strings. Oh and those big brass drones everyone loves these days.

The ending (3:50 odd) attempts to mimic the beginning of Carapacian Dominion, to act as a kind of bookend for the album. It doesn't do it perfectly, but that's my fault :P

I quite like this one. I'm not fully sold on the odd sound effects since they're always a bit gimmicky, but the overall theme kinda works. The name was fairly obvious - I did attempt to call it "What a daring Nightmare" but Alex Rosetti beat me to it.