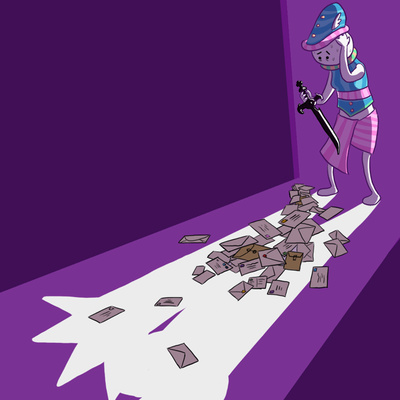 Aaah this one. This caused me a bit of unexpected grief, but we'll get to that.

Basically, I wanted to do some kind of Parcel Mistress/PM theme. Representing her transition from postal worker, to warrior, to queen. We start off quite desolate, and we gradually build up to a kind of royal, celtic march.

The instrumentation is a bit all over the place (bagpipes, panpipes, probably an Oud somewhere as well). Most of it was attempting to channel various stereotypical "World Music" concepts into one track (We're dealing with the remnants of Earth as a setting, so one idea is a kind of combination of different cultural styles - It doesn't fully work, since it's mostly just the instrumentation applied to a fairly simple layout and melody).

As for the melody itself, I quite like it - It's very playful and jumpy, yet brings a sense of duty, which fits quite well. Explore also makes an appearance during the kind of transitional "Wandering" segment. Also because I really like Explore.

The name, and it's worth mentioning I've done incorrect translations before (see Rex Duodecim Latinus), is supposed to be "Royal Mail" in Scots Gaelic. It's a bit of a strange pun on PM as a character...

As a few people pointed out when they first heard it, that the notes starting from 0:20 onwards by the sitar are viciously close if not identical to the start of Schala's theme from Chrono Trigger. And yes, yes they are. There is a subtle difference but the majority of the phrase matches. Depending on who you ask this ranges from either an atrocity or an inevitability given the limited nature of conventions and structure of music.

Personally, the reference was unintentional. Let's get this straight also, I'm a ludicrously huge Yasunori Mitsuda fanboy. I'm not fully ruling out that at some level I was remembering ST when making LR, but I honestly could not recall the song until someone linked a video, and even afterwards I don't recall the song from the game. There are tonnes of tracks from CT that I recall fondly but ST just isn't one of them. This all said, there was no malevolence nor deceit intended when writing LR and I apologise to anyone offended by it.

That's really all I have to say on the matter.