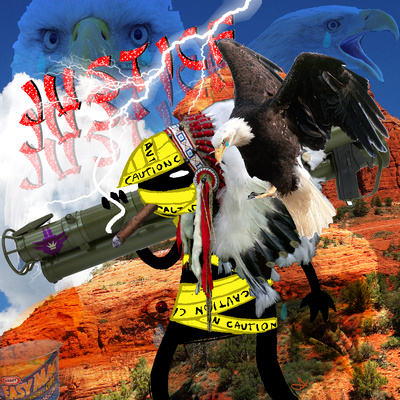 I always felt like this song was in a bit of an unfortunate position, being a bonus song on the Wanderers album, which basically meant that only people who bought the album or those who specifically scoured youtube for it would get to hear it.

So I’m gonna bring it to your attention and hopefully someone will be hearing it for the first time!

Tomahawk Head was pretty much a full-on collaborative effort between me and Radiation. We had already done some stuff together with the full version of MeGaLoVaNia, but this song was a much more even split IMO. Radiation basically wrote most of the composition in midi form, and I had the task of unleashing my samples and live guitar on it. I also did some minor rewrites, like fleshing out the acoustic middle-section as well as adding the guitar solo section.

This song was intended as ARs theme, and uses a lot of (stereotypically) Native American instrumentation. In that sense, it kinda reminds me of a lot of Jade/Bec themes, where there’s an obvious eastern Asian vibe, even though thematically there’s no real canonical connection between Jade and eastern Asian culture.

I actually consider this a really cool use of ethnic instrumentation. It’s not even the fact that it deliberately tries to go against a stereotype to make a point, but rather that it treats the ethnic instruments as any other: it makes use of the characteristics of the sounds to underline a particular situation or character, and ignores any cultural connotations of the instrument.

When you think about it, it’s pretty silly to assume that Jade has to be Asian because some songs associated with her use ethnic instrumentation. In that sense, I might as well claim that Rose has to be Italian, because hey, that’s where violins originally came from!

At the end of the movie Kill Bill, there’s a final showdown between The Bride and O-ren Ishii. They’re both wielding katanas and the setting is a very stereotypical, snow-covered japanese garden. You would THINK that you’d at least get some taiko drums as a backing, but nope. The song that plays is “Don’t Let Me Be Misunderstood” by Santa Esmeralda, which can best be described as a flamenco/disco hybrid. And it fits PERFECTLY.

In that sense, I think that this song too fits AR very well, even though his character has fuck-all to do with Native American culture.